During 2003–2009, we identified 544 cases of Cronobacter spp. infection from 6 US states. The highest percentage of invasive infections occurred among children <5 years of age; urine isolates predominated among adults. Rates of invasive infections among infants approximate earlier estimates. Overall incidence of 0.66 cases/100,000 population was higher than anticipated.

Cronobacter spp. are gram-negative bacteria mainly perceived to cause serious infections in infants (1). Cases are most common among newborns or young infants; estimated mortality rates are as high as 80% (2). Infections also occur in older children and adults (3). In adults, Cronobacter spp. cause septicemia, pneumonia, osteomyelitis, wound infections, and splenic abscesses (4).

Little is known about reservoirs or routes of transmission other than ingestion of contaminated powdered infant formula (5–7). However, organisms have been isolated from other foods and environmental sources, and infections have occurred among persons who did not consume or handle formula (8,9).

FoodNet is a collaborative program among the Centers for Disease Control and Prevention, 10 state health departments, the US Department of Agriculture, and the Food and Drug Administration. FoodNet conducts active, population-based surveillance for selected laboratory-confirmed enteric infections. In 2010, clinical laboratories within FoodNet were asked to query records for all laboratory-confirmed isolations of Cronobacter spp. (formerly Enterobacter sakazakii) reported from January 1, 2003, through December 31, 2009, or for as many months in this period as was feasible. These isolations are subsequently referred to as Cronobacter cases. Participating laboratories were in California, Colorado, Maryland, Minnesota, New Mexico, and Tennessee. We recorded information on patient age, isolation site, and date (month and year) of specimen collection. We defined invasive infection as isolation of the organism from blood or cerebrospinal fluid. We conducted descriptive analyses and calculated incidence rates within age groups and overall by using Excel (Microsoft Corp., Redmond, WA, USA) and SAS version 9.3 (SAS Institute, Cary, NC, USA).

For incidence calculations, we estimated the number of persons served by each laboratory by calculating the proportion of isolates of other enteric pathogens (Campylobacter, Listeria, Salmonella, Vibrio, and Yersinia spp. and Shiga toxin–producing Escherichia coli) that each laboratory reported to FoodNet, by age group, for each year that the laboratory was surveyed. We applied this proportion to US census data for that age group, year, and FoodNet site and summed values from all laboratories to obtain an age-group denominator for 2003–2009. We then calculated age-specific incidence rates by dividing the number of Cronobacter cases for each age group by the overall age-group denominator and multiplying by 100,000. Similarly, we calculated the overall incidence rate by dividing the total number of Cronobacter cases by the sum of the age-group denominators and multiplying by 100,000.

Figure 1. Isolations of Cronobacter spp., by specimen source and patient age group, Foodborne Diseases Active Surveillance Network (FoodNet), 2003–2009. Data are based on a sample from laboratories in 6 states (California, Colorado,... 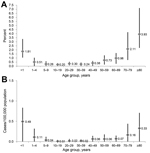 Although rates were highest among persons at age extremes, we documented isolations for persons in all age groups and from a variety of clinical specimen sources. Although infants accounted for only a small percentage of isolates, they also accounted for the highest rate of invasive infections. More than a third of isolates from infants came from the respiratory tract and might represent colonization rather than infection. Rates for adults >80 years of age were higher than rates for any other age group and twice as high as rates for infants; however, we lack information to distinguish infection from colonization.

Half of the isolates in our survey came from urine, and these were mainly from older adults. Although others have documented urinary tract infections caused by Cronobacter spp. (3,15), our data suggest that urine might be a more common site of infection than previously thought. Studies are needed to understand the contribution of Cronobacter spp. to the prevalence and costs associated with urinary tract infections, which are common in older adults.

Our findings are subject to limitations. Only a third of laboratories that participate in FoodNet provided data for this study, and reporting varied by state and year. Our sample might not be representative of the states surveyed or the United States as a whole. Because we did not review charts or interview patients, we did not have information on underlying conditions, clinical signs and symptoms, patient sex, or possible exposures. Isolates were not available for speciation or subtyping.

Although rates of invasive Cronobacter spp. infections among infants in our study approximated earlier estimates, overall rates of isolation of Cronobacter spp. from ill persons in the United States were higher than we anticipated, and the very young and very old were disproportionately affected. A substantial proportion of isolates came from the urinary tract, raising questions about risk factors for transmission and clinical manifestations. Routine, systematic surveillance and special studies will be essential for understanding these findings, identifying reservoirs of infection and vehicles of transmission, and developing effective prevention and control measures.

Page created: August 13, 2014
Page updated: August 13, 2014
Page reviewed: August 13, 2014
The conclusions, findings, and opinions expressed by authors contributing to this journal do not necessarily reflect the official position of the U.S. Department of Health and Human Services, the Public Health Service, the Centers for Disease Control and Prevention, or the authors' affiliated institutions. Use of trade names is for identification only and does not imply endorsement by any of the groups named above.