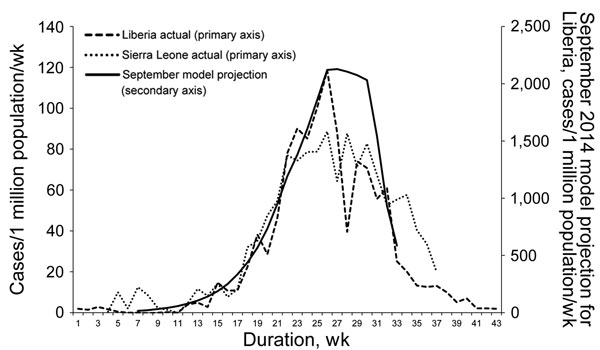 Figure 3. Comparison of estimated weekly Ebola virus disease case rate for Liberia with intervention with actual weekly case rates for Liberia and Sierra Leone. The September 2014 modeled projection curve was based on Figures 9 and 10 in Meltzer et al. (22), by using model predictions calculated assuming that interventions started on September 24, 2014. Liberia, week 1 begins May 4, 2014; Sierra Leone, week 1 begins May 25, 2014. The model projected the incidence that would occur if the proportion of Ebola patients who were hospitalized was 25% at week 22, increased to 40% at week 26, and increased again to 70% at week 30, while the proportion in effective home isolation remained constant at 10%. The similarity in the increase and decrease in the actual epidemic curves in both Sierra Leone and Liberia closely match the model after taking into account differences in start dates and population sizes between the 2 countries, implying that the proportion of cases effectively isolated in both countries followed a similar time course as the model.

Page created: October 16, 2015
Page updated: October 16, 2015
Page reviewed: October 16, 2015
The conclusions, findings, and opinions expressed by authors contributing to this journal do not necessarily reflect the official position of the U.S. Department of Health and Human Services, the Public Health Service, the Centers for Disease Control and Prevention, or the authors' affiliated institutions. Use of trade names is for identification only and does not imply endorsement by any of the groups named above.