Detection of Circovirus in Foxes with Meningoencephalitis, United Kingdom, 2009–2013 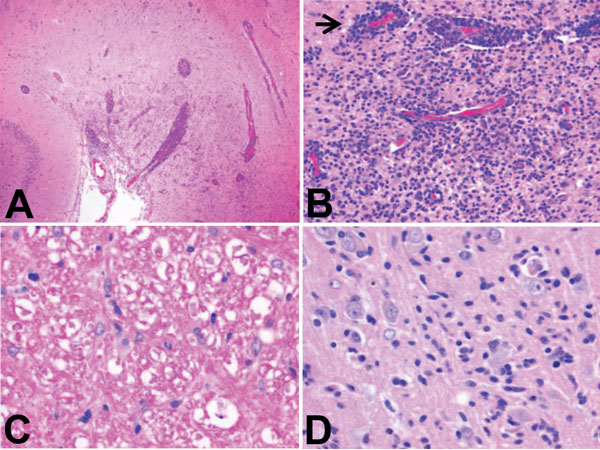 Figure 1. Histopathologic features of brain tissue from foxes with possible virus-induced neurologic disease. A) Multifocal, randomly distributed areas of severe encephalitis and meningitis in the cerebrum (original magnification ×40). B) Detail of encephalitis in the cerebrum (original magnification ×200). Gray and, to a lesser extent, white matter of the cerebrum showed randomly dispersed areas of astrocytosis, gliosis, and infiltration with lymphocytes and plasma cells. Blood vessels in affected areas show perivascular cuffing with distention of Virchow-Robin spaces with up to 10 layers of lymphocytes and plasma cells (arrow). C) Detail of white matter in the cerebellum (original magnification ×400). Axons in affected white matter showed degeneration, characterized by formation of spheroids, shrinkage, and fragmentation; axon sheaths containing microglia or macrophages; and presence of gitter cells in surrounding neuropil. Cerebellum was mildly affected, and meninges, especially of the cerebrum, were frequently distended with lymphocytes and plasma cells. D) Detail of gray matter of cerebrum (original magnification ×400). Individual neuronal cell bodies were frequently surrounded by up to 5 glial cells (i.e., sattelitosis) and showed margination of Nissl substance, hyperchromasia, degeneration, and necrosis. Tissue sections were subjected to conventional hematoxylin and eosin staining.