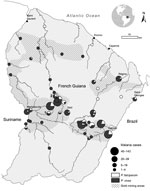 To the Editor: French Guiana, an overseas territory of France and part of the European Union, is located on the northeast coast of South America (Figure). During 2008– 2014, the number of malaria cases reported in French Guiana drastically decreased (1). The littoral area (≈30 km–wide Atlantic Ocean coastal band between the cities of Awala-Yalimapo and Ouanary) and the lower part of the Maroni River bordering Suriname (between the cities of Maripasoula and Saint-Laurent du Maroni) are considered malaria free, but this status may not reflect malaria transmission in the inland rainforest (2–4). Since 2008, French Armed Forces have been involved in military operations to control and reduce illegal gold mining activities in forested areas. Soldiers and military policemen usually spend 1–3 weeks in illegal gold mining sites in remote rainforest areas before returning to the littoral area or to bases on rivers bordering Suriname and Brazil. Despite malaria prevention strategies (5), these deployments have resulted in several outbreaks and increased malaria incidence among French forces (6). Most malaria episodes occurred during or just after deployments, so presumed locations of exposure can be easily identified.

Information about malaria cases was collected during 2008–2014 by the French Armed Forces’ epidemiologic surveillance system by using a mandatory, specific form that captured putative place of malaria exposure and biologic data for case-patients (6). Geographic coordinates of presumed places of contamination were uploaded into a geographic information system (ArcGIS; http://www.esri.com/software/arcgis/) to produce a malaria distribution map.

Entomologic investigations were conducted in 2 malaria epidemic locations where French forces were deployed: Eau-Claire and Dagobert. Collected Anopheles spp. mosquito specimens were identified by using morphologic keys specific to the Guyana Shield, a geomorphologic formation underlying French Guiana and other areas (7). Nonidentifiable Anopheles mosquito specimens were further identified molecularly (8). PCR products from the internal transcribed spacer 2 gene were sequenced, and Anopheles species were identified by comparing sequences to those in GenBank (http://www.ncbi.nlm.nih.gov/genbank/) by searching with BLAST (http://blast.ncbi.nlm.nih.gov/Blast.cgi). Testing for P. falciparum and P. vivax infections was conducted for all Anopheles spp. specimens by using nested PCR, as described (9).

In September 2013, another malaria outbreak occurred 3 weeks after the deployment of 15 soldiers in Dagobert (4.06028°N, −53.70667°E; Figure). The attack rate among these soldiers was 53.3% (8/15): 7 P. vivax infections and 1 co-infection with P. vivax and P. falciparum. Mosquitoes were collected 3 months later by using human landing catches during 5 consecutive days. The area had been free of illegal gold mining activities since the 15 soldiers were deployed. A total of 321 Anopheles mosquitoes were collected in this location; 95.6% were identified as the same 4 species as in the Eau Claire mosquito collection (Technical Appendix Table). Only 1 specimen (0.4%, 1/282), An. darlingi mosquito, was infected with P. vivax.

These results suggest a high level of malaria transmission involving An. darlingi and other Anopheles species as primary vectors of malaria in the rainforest. The findings probably highlight malaria hyperendemicity in communities of undocumented gold miners, who are often mobile and pose a challenge for controlling malaria and other infectious diseases in the region. Indeed, these gold miners could reintroduce malaria in areas where competent vectors exist in the coastal part of French Guiana and in Surinam and Brazil, which border French Guiana. This potential for transmission could seriously threaten the success of malaria elimination programs in the Guiana Shield. Further studies are needed to better evaluate malaria epidemiology in these undocumented populations to determine how best to adapt strategies to control malaria transmission in this subregion of South America.