Hispanics comprise a growing portion of the US population and might have distinct risk factors for tickborne diseases. During 2000–2013, a total of 5,473 Lyme disease cases were reported among Hispanics through national surveillance. Hispanics were more likely than non-Hispanics to have signs of disseminated infection and onset during fall months.

Lyme disease (LD) is caused by the spirochete Borrelia burgdorferi, transmitted to humans through the bite of infected Ixodes scapularis and I. pacificus ticks. Early localized infection typically manifests as erythema migrans with concomitant fever and malaise; disseminated infection can lead to facial palsy, carditis, arthritis, or neuropathy (1).

Outdoor workers in LD-endemic areas have increased odds of occupational exposure to ticks and a rate of LD seropositivity substantially higher than that of the general population (2,3). In the United States, Hispanics comprise 43.6% of grounds maintenance workers and 43.4% of workers in the farming, fishing, and forestry industries, potentially placing this population at greater risk for LD from occupational exposures (4).

An estimated 9 million Hispanics live in the 13 states with the highest reported incidence of LD, all of which are located in the Northeast, upper Midwest, and mid-Atlantic regions (5,6). Little is known, however, about the epidemiology of LD in the rapidly growing and diverse US Hispanic population. Improved understanding of LD in Hispanics could aid prevention efforts by public health practitioners and diagnosis by clinicians. The objective of this study was to describe the epidemiology of LD in the US Hispanic population and identify differences between Hispanics and non-Hispanics with LD by using national surveillance data.

LD is a nationally notifiable condition, and cases are reported by state and local health departments to the Centers for Disease Control and Prevention (CDC) through the National Notifiable Diseases Surveillance System in accordance with previously established protocols (7). LD cases reported during 2000–2007 were confirmed cases only. In 2008, a revised case definition was implemented that altered the laboratory criteria and distinguished between confirmed and probable cases; cases reported during 2008–2013 included both categories (8).

We used 2010 US Census population data to calculate incidence rates (5,9). Weighting was applied to state- and county-specific numbers of cases to account for variations in completeness of ethnicity data. Descriptive statistics and comparisons were calculated by using SAS version 9.3 (SAS Institute, Cary, NC, USA). We compared median age of Hispanics and non-Hispanics with LD using the Kolmogorov-Smirnov 2-sample test. Risk ratios (RRs) were used to compare categorical data. 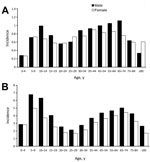 Figure. Age- and sex-specific incidence of Lyme disease among Hispanics (A) and non-Hispanics (B), United States, 2000–2013. For persons >35 years, age categories are collapsed into 10-year intervals. Incidence is cases...

Overall, the epidemiology of LD among Hispanics was similar to that among non-Hispanics: bimodal age distribution, slight predilection in males, and clustering in states to which LD is highly endemic were apparent (10). However, we identified several important differences. Most notably, Hispanics with LD were significantly more likely than non-Hispanics with LD to have signs of disseminated infection and symptom onset during fall months.

Although the overall incidence of LD in Hispanics was lower than that in non-Hispanics, additional research is needed to determine the reasons underlying these differences and the extent of any LD underdiagnosis in the Hispanic population. Inadequate healthcare access, language barriers, and lack of LD awareness could cause both underdiagnosis and delays in diagnosis in the Hispanic population. During 2009–2013, a total of 41.5% of Hispanics lacked health insurance, compared with 15.1% of non-Hispanic whites; 15.5% of Hispanics described delay in or nonreceipt of medical care because of cost (11). Furthermore, whether the predilection toward symptom onset in the fall months for Hispanics results from delays in medical care or other factors, such as seasonal outdoor labor patterns, is unclear. Lastly, because a larger proportion of Hispanics than the overall US population live in urban areas (12), the risk for LD might be differentially diluted in Hispanics.

Our findings were subject to several limitations. First, we had to exclude more than half of reported LD cases because of missing ethnicity data. Although we have no reason to believe that case reports with missing ethnicity data differed otherwise from those included in this study, we cannot exclude this possibility. Ethnicity reporting is also subject to error. Finally, surveillance data are limited by underreporting and reporting bias, which might differ by state and between Hispanic and non-Hispanic populations.

Reaching at-risk populations with culturally and linguistically appropriate prevention education is essential. Although some educational materials about prevention of tickborne diseases have been translated to Spanish (13,14), additional translations and modifications to address cultural differences would be helpful. Furthermore, targeted educational campaigns could enhance use of these materials and improve the reach, retention, and overall impact of prevention education.

We identified specific risk groups and patterns of LD within the US Hispanic population. Direct and more in-depth assessments regarding prevention practices, knowledge, and LD epidemiology on local and national scales will further the understanding of LD risk in this population and guide future targeted prevention and education efforts.