A survey of asymptomatic children in Uganda showed Plasmodium malariae and P. falciparum parasites in 45% and 55% of microscopy-positive samples, respectively. Although 36% of microscopy-positive samples were negative by rapid diagnostic test, 75% showed P. malariae or P. ovale parasites by PCR, indicating that routine diagnostic testing misses many non–P. falciparum malarial infections. 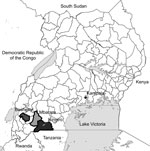 In the southwestern region of Uganda, Plasmodium transmission is low and unstable. In 2004 and 2010, we conducted surveys that showed progress in decreasing P. falciparum infections in this region, although comparatively little is known about the prevalence of other species in this region (3). To determine the comparative species prevalence by multispecies rapid diagnostic test (RDT) and blood-smear microscopy, we conducted a cross-sectional survey of 631 children <5 years of age during the low transmission season of 2014 in 3 districts in southwestern Uganda (Mbarara, Bushenyi, and Isingiro) (Figure). These 3 districts represent a range of transmission intensities from low to high, respectively (4).

We surveyed 631 children with a mean age of 2.4 years (Table 1). Bed net coverage was high (91.6%) and met targets for 2014 (5). Only 5 households (0.8% of children surveyed) reported use of indoor residual spraying. Of the 3 districts, Isingiro had the highest proportion of children living in the lowest wealth quartile (41.8%) and in households with thatched or leaf roofing (7.3%); this district also had the lowest consistent bed net use (85.7%) (Technical Appendix Table 1).

Malaria parasite prevalence was 2-fold higher by RDT than by microscopy (6.7% vs. 3.5%; Table 1). RDT correctly identified 9 of 12 P. falciparum monoinfections and mixed infections. A comparison of the diagnostic performance of RDT and microscopy (uncorrected by PCR) indicates that agreement of results from these methods was high (>94%); however, agreement was poor in detecting non–P. falciparum infections (κ = 0.15) compared with detecting overall infection (κ = 0.41) and P. falciparum infection (κ = 0.33) (Table 2). PCR detected parasite DNA in 53.7% (22/41) of RDT-positive samples; of these, 55% (12/22) correlated with the correct RDT band pattern interpretation (Technical Appendix Table 2).

Approximately one third (8/22) of children with microscopy-positive cultures had negative RDT results (Technical Appendix Table 3). Of these 8 discordant cases, 5 harbored PCR-confirmed P. malariae or P. ovale monoinfections; all had parasite densities <1,060/μL (Technical Appendix Table 2). Conversely, two thirds (28/42) of RDT-positive samples were negative by microscopy. Of the 28 children with RDT-positive and microscopy-negative samples, 8 (28.6%) had a malaria infection within the previous month; 4 of those had detectable parasite DNA.

Our findings indicate that strides in the control of P. falciparum malaria have continued in Uganda. Compared with data from 2010, P. falciparum prevalence by microscopy had a 4- and 5-fold decrease in urban and rural villages, respectively (3). Our estimates are consistent with prevalence estimates from 2009 (12%) and 2014–2015 (4%) (1,6).

One possible reason for the nearly equivalent prevalence of asymptomatic P. falciparum and non–P. falciparum infections is the influence of seasonal fluctuations in species prevalence; for example, P. malariae prevalence has been higher during the dry season in West Africa (10). Another possibility is that the use of P. falciparum–based RDTs, which are advantageous because of low infrastructure costs and high prevalence of this species in Uganda, has enabled non–P. falciparum prevalence to go undetected. Alternatively, our results may represent a true shift in species prevalence. What is apparent is that pLDH/HRP-2–based RDTs may not be the most sensitive diagnostic method to determine true prevalence in the future. In our study, RDT was negative in all 3 microscopy-identified P. ovale and in 3 of 7 P. malariae monoinfections, a finding that may be in part attributable to these species’ low parasite densities (range 39–1,057/µL).

Identifying P. malariae and P. ovale infections is critical because P. malariae has been associated with chronic infections that can persist for years, including a chronic nephrotic syndrome that, once established, is unresponsive to treatment (10). Because these species have milder symptoms and lower parasite prevalence than P. falciparum, infections can remain undetected for extended periods, enabling persons to serve as reservoirs for ongoing transmission (2). These species may transmit gametocytes more efficiently at low parasite densities; a recent study found increased P. falciparum gametocyte production in the setting of mixed P. malariae infections (11). In our study, 30% of non–P. falciparum monoinfections harbored gametocytes. Finally, on the therapeutic side, studies have shown failure of parasite clearance after artemisinin-based combination therapy in non–P. falciparum infections, including P. malariae (2,9,12). P. ovale and P. vivax also form hypnozoites in the liver, and safe treatment with a 14-day course of primaquine is necessary to clear parasitemia. Six children in our study harbored P. ovale or P. vivax infections.

From a malaria control perspective, the performance of the pLDH/HRP-2–based RDT was suboptimal in our data, indicating a need for accurate diagnostic methods aimed at detecting Plasmodium infections in this region. A diagnostic method that has been effective in resource-constrained settings is loop-mediated isothermal amplification (LAMP), which affords higher sensitivity in detecting low-level parasitemia, especially P. malariae infections that tend to exhibit lower parasite densities than P. falciparum and P. vivax (13). In a 2013 rural Uganda study, the sensitivity of LAMP was ≈1.8-fold greater than microscopy, comparable to PCR (14). Wide-scale application of a field-friendly technique such as LAMP might be possible in southwestern Uganda, where asymptomatic persons might have low-density malaria infections that persist during the low malaria transmission season, enabling these persons to serve as reservoirs for ongoing transmission and disease (15). Effective methods for detecting and treating these infections are essential for controlling and eliminating malaria.

Ms. Roh completed this research while obtaining a master’s degree in public health at the Yale School of Public Health in 2015. She is currently a predoctoral student in the Department of Epidemiology and Biostatistics at the University of California, San Francisco. Her primary research focuses on malaria transmission dynamics and evaluation of targeted interventions for malaria elimination.

The authors thank the Médecins Sans Frontières Epicentre Mbarara research team for their hard work and support, without whom this research would not have been possible. We also thank the population of Mbarara, Bushenyi, and Isingiro Districts for their willingness to participate in the study.

1Preliminary results from this study were presented at the 64th Annual Meeting of the American Society of Tropical Medicine and Hygiene, October 25–29, 2015, Philadelphia, Pennsylvania, USA.

3These senior authors contributed equally to this article.