We observed a sudden and rapid increase in rare invasive pneumococcal disease serotype 7C, from an annual average of 3 cases during 2000–01 through 2015–16 to 29 cases in 2016–17. The increase was caused almost entirely by clonal expansion of sequence type 177, previously associated with vaccine serotype 19F.

The bacterium Streptococcus pneumoniae is a major global cause of meningitis, septicemia, and pneumonia and is associated with high rates of illness and death. In September 2006, the childhood immunization program in the United Kingdom introduced PCV7, a pneumococcal conjugate vaccine against the 7 most common serotypes causing invasive pneumococcal disease (IPD) in children; a 13-valent PCV replaced it in April 2010 (1). Both vaccines have been associated with rapid and widespread declines in IPD across all age groups and, despite an increase in other disease from non-PCV serotypes, overall IPD rates have dropped by 56% and have remained lower than prevaccine rates (1).

In England and Wales, Public Health England (PHE) conducts enhanced national surveillance for IPD (1). National Health Service laboratories routinely report clinically significant infections to PHE and submit invasive isolates to the PHE National Reference Laboratory for serotyping (2). We observed an unusual increase in invasive isolates serotyped as 7C early in 2017 that continued into the 2017–18 epidemiologic year. We analyzed the epidemiology, clinical characteristics, genetic epidemiology, and outcomes of serotype 7C IPD since 2000–01 in England and Wales.

We performed whole-genome sequencing (WGS) on 44 of 66 invasive 7C isolates collected during July 2005–June 2017, as well as 37 of 42 isolates collected during July 2017–January 31, 2018. We used previously published methods for WGS analysis (3,4). We used Bowtie version 2 (5) to map WGS reads to sequences for 1,689 antimicrobial-resistant genes in the ARG-ANNOT database (6). We used PBP typing to predict β-lactam resistance (7). Using MEGA7 (8), we drew a neighbor-joining tree (9) based on single-nucleotide polymorphism (SNP) alignments, as previously described (10). We included PHE data available on the European Nucleotide Archive (https://www.ebi.ac.uk/ena) (Technical Appendix Table) and used a non–sequence type (ST) 177 serotype 19F (Taiwan 19F-14; GenBank accession no. NC_012469.1) as a reference sequence. We did not identify and remove recombination events in the WGS alignment before constructing the phylogeny. Data on antimicrobial drug susceptibility testing performed according to British Society for Antimicrobial Chemotherapy guidelines (11) were available on a subset of isolates. 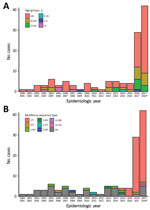 Figure 2. Neighbor-joining tree following single-nucleotide polymorphism analyses on 59 pneumococcal isolates collected in England and Wales during July 2005–June 2017. The percentage of replicate trees in which the associated taxa clustered together...

We did not detect any antimicrobial drug resistance determinants or PBP types suggesting β-lactam nonsusceptibility in the genomes of any ST177 7C isolates. MIC data were available on 13 serotype 7C isolates but only 2 were ST177; both were fully susceptible to all antimicrobial drugs tested.

In England and Wales, the recent increase in IPD due to the nonvaccine serotype 7C was associated with clonal expansion of ST177. Previously, this serotype was associated with vaccine serotype 19F, although we also observed serotype 24F isolates with this ST in later years. Nearly all the increase occurred in older adults, with no evidence of change in clinical presentation or CFR when compared with the other serotypes causing IPD in the same age groups. The age-related CFRs observed in our cohort are consistent with those from other industrialized countries with established PCV programs (12).

Additional WGS data from historical serotypes 19F and 24F isolates may help determine whether this 7C-ST177 arose from capsular switching, which appears likely given the rapid expansion of this clone. It is also possible that the increase in serotype 24F IPD after PCV13 replaced PCV7 may be attributable to ST177 (1), although we did not investigate this in our study. IPD cases due to serotype 24F have increased in children (from 3 to 28 cases), adults (from 7 to 71 cases), and older adults (from 14 to 84 cases) since PCV13 implementation (1).

ST177 has been associated with serotype 19F, with 39/42 isolates submitted to the PubMLST isolates database associated with this serotype (https://pubmlst.org/spneumoniae/). In England and Wales, ST177 was represented exclusively by serotype 19F in elderly patients before PCV7 introduction (13). Because serotypes 19F and 24F are common causes of IPD, we were unable to sequence all invasive isolates. The clonal expansion of 7C-ST177 could be a consequence of natural fluctuation of nonvaccine serotypes caused by negative frequency selection (14). Although ST177 is the ST of the globally disseminated Portugal 19F-21 Pneumococcal Molecular Epidemiology Network clone that is multidrug resistant (15), we did not identify resistance determinants in any of the 7C-ST177 isolates we studied.

In summary, serotype 7C remains a rare cause of IPD in England and Wales but is linked to a sudden, rapid increase in cases of IPD because of clonal expansion of ST177, previously associated with vaccine serotype 19F. We encourage other countries to monitor pneumococcal surveillance programs for evidence of similar increases.

Mr. Makwana is an epidemiologic analyst at Public Health England in London. He is involved in the enhanced national surveillance of invasive pneumococcal disease in England and Wales, with a particular interest in the direct and indirect population impact of conjugate vaccines on prevention of invasive bacterial infections.

We thank Mel Kephalas and Rashmi Malkani for the follow-up of unserotyped isolates; Pauline Waight, who managed pneumococcal surveillance before 2016; and Catrin Moore for reporting invasive pneumococcal disease cases in southern England serotyped by the John Radcliffe Hospital Oxford (Oxford, UK) laboratory. We also thank the staff at laboratories in England and Wales who referred isolates for serotyping and provided additional information on request.

Disclaimers: C.S. and N.K.F. as employees of Public Health England’s Respiratory and Vaccine Preventable Bacteria Reference Unit, have received research funding from Pfizer and GlaxoSmithKline but receive no personal remuneration. The Immunisation, Hepatitis, and Blood Safety Department has provided vaccine manufacturers with postmarketing surveillance reports on vaccine-preventable diseases, including pneumococcal infections, which the companies are required to submit to the UK Licensing Authority in compliance with their Risk Management Strategy. A cost recovery charge is made for these reports. All other authors declare no competing interests.