We demonstrate maintenance and transmission of severe fever with thrombocytopenia syndrome virus by Haemaphysalis longicornis ticks in the larva, nymph, and adult stages with dissemination in salivary gland, midgut, and ovarian tissues. The H. longicornis tick is a competent vector to transmit this virus in both transovarial and transstadial modes.

Severe fever with thrombocytopenia syndrome (SFTS) is an emerging infectious disease caused by SFTS virus (SFTSV), identified in China in 2009 (1) and subsequently in South Korea (2) and Japan (3). Symptoms of SFTS usually include fever, thrombocytopenia, and leukocytopenia; case-fatality rates are 10%–30% (1,4). SFTS is implicated as largely a tick-associated disease, supported by evidence that many patients had exposure to ticks before disease onset (1). The longhorned tick, Haemaphysalis longicornis, the most abundant human-biting tick species in most SFTS-endemic areas of China (5), was found to harbor SFTSV (1,6,7). These studies suggested that H. longicornis ticks might be competent vectors for SFTSV transmission. Our study was designed to determine the role of the H. longicornis tick as a vector in maintenance and transmission of SFTSV. 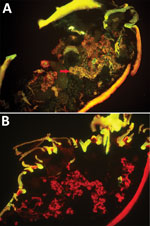 We randomly allocated 90 female H. longicornis ticks from an SFTSV-free colony into 2 equal groups, experimental and control. We injected the experimental group with SFTSV and the control group with phosphate-buffered saline (PBS). Seven days postinjection, we used 18 of the 35 live SFTSV-infected ticks for the detection of viral RNA by real-time reverse transcription PCR (rRT-PCR) (Technical Appendix); all showed positive results, confirmed by subsequent rRT-PCR and sequencing analysis. Twelve days postinjection, we dissected 5 live ticks from the experimental group to detect SFTSV in salivary glands and ovaries by indirect fluorescence assay (IFA), which showed notable SFTSV-specific fluorescence (Figure 1, panel A). For the control group, none of the 19 ticks tested by rRT-PCR had SFTSV RNA, and none of the 5 ticks tested by IFA showed SFTSV-specific fluorescence (Figure 1, panel B).

We then let the remaining 12 live ticks from both groups feed on naive Balb/C mice (4 ticks/mouse) until the ticks detached from the mice. The engorged females were harvested and maintained to lay eggs. We determined transovarial transmission of SFTSV by further testing of SFTSV RNA from eggs, larvae, and nymphs using rRT-PCR. A total of 15 pools of eggs laid by 5 infected H. longicornis ticks (3 pools from each tick, each pool coming from a single female) were SFTSV RNA positive. In contrast, the egg pools from ticks of the control group were all negative. When hatched to larvae, 20 of 25 pools derived from the infected H. longicornis ticks (5 pools from each tick) tested positive for SFTSV RNA; all 25 larvae pools of the control group tested negative (Table 1).

Three of 4 pools of saliva and hemolymph from the experimental group were SFTSV RNA positive. We selected 5 females at random from each group to detect SFTSV in tissues by IFA. The salivary glands, midguts, and ovaries of the SFTSV-injected group displayed SFTSV-specific fluorescence (Figure 2).

We report the experimental maintenance and transmission of SFTSV in H. longicornis ticks. After microinjection of SFTSV, the virus disseminated in ovaries and salivary glands. Infected H. longicornis ticks could transmit SFTSV successfully in both transovarial and transstadial modes. The appearance of SFTSV in saliva and hemolymph suggests that the virus circulates in the tick hemocoel and is expressed in saliva. In addition, naive Balb/C mice infested with experimentally infected adults, larvae, and nymphs all became infected, evidenced by both detection of SFTSV-specific RNA and seroconversion.

These findings, together with data on natural infection in the field (1,6), implicate H. longicornis ticks as competent vectors for SFTSV. However, the evidence derived from IFA and rRT-PCR tests could not indicate that the virus is infectious. More efforts should be taken to demonstrate the infectivity of SFTSV in the transmission cycle.

H. longicornis ticks are widely distributed in the Asia–Pacific region (8–12). Predominant hosts of H. longicornis ticks include humans, poultry, livestock, wild rodents, and birds (12–14). As displayed in mice in the current research, SFTSV is likely to be maintained through vertical and horizontal transmission in ticks that infest these wild and domestic mammals. This maintenance has been evidenced by an extraordinarily high prevalence of SFTSV in sheep, cattle, dogs, pigs, and other animals (7,14). In areas where H. longicornis ticks are endemic, infested animals could be considered as key reservoirs in maintaining and transmitting SFTSV (15). The close contact between animals and their owners could pose another way of acquiring infection, in addition to tick bites.

This study was supported by the Natural Science Foundation of China (grant nos. 81621005 and 81473023) and the China Mega-Project for Infectious Diseases (grant no. 2018ZX10713002). The funding agencies had no role in the design and conduct of the study, collection, management, analysis, interpretation of the data, preparation, review, or approval of the manuscript.