Pseudorabies virus (PRV) primarily infects swine and has several secondary hosts, including cattle, dogs, and cats. PRV, also called Aujeszky disease virus or Suid herpesvirus 1, is a member of the Alphaherpesvirinae subfamily within the family Herpesviridae. PRV infection has not been confirmed in humans (1), but previous reports have suggested the possible presence of PRV infection in 3 immunocompetent humans in whom fever, sweating, and neurologic complaints developed; virus neutralization and immune precipitation tests were positive for PRV antibody (2,3). We report a human case of human infectious endophthalmitis caused by PRV in a woman from Jiangxi Province, China, in July 2017.

On June 14, 2017, sewage from a hog farm spilled onto a 46-year-old woman from Jiangxi Province, China, who worked as a swineherder; her daily work was to feed swine and clean hoggery sewage.. The next day, she had a headache and fever of 39.5°C. Three days later, she became visually impaired and was admitted to a local hospital, where she was treated empirically with meropenem, vancomycin, and acyclovir. On June 29, after no significant improvement, she was transferred to Huashan Hospital of Fudan University (Shanghai, China), to treat unresponsive fever, headaches, and visual impairment. 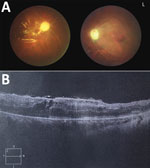 The on-staff ophthalmologist diagnosed endophthalmitis in the patient, considering viral infection as most likely. The patient was transferred to the ophthalmology department for vitrectomy surgery on the right eye on June 30. During the operation, ≈2 mL of vitreous humor was taken for culture and next-generation sequencing (NGS) (Technical Appendix) 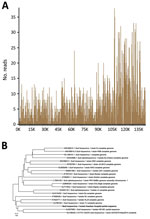 To further validate our results, we constructed a plasmid and a standard curve for real-time PCR and obtained quantitative results of viral DNA load as 2.7 × 106 copies/mL (Technical Appendix Figure 3). To rule out contamination, we performed PCR of the PRV on a control group of 7 persons; all were negative (Technical Appendix Figure 2). Other possible viral causes of infective endophthalmitis, such as varicella-zoster virus, herpes simplex virus, and cytomegalovirus, were excluded through PCR. One week after surgery, culture result for vitreous humor was negative; the patient’s fever and headache had resolved, and visual acuity had improved slightly. The patient was discharged on July 11; during the last clinical check-up (December 6, 2017), the visual acuity of her left eye had improved to 0.2, and the right eye remained at slight light perception.

During the follow-up period, we obtained the patient’s plasma and CSF samples and ordered PRV antibody testing. PRV antibody was detected in all plasma samples at 4 and 5 months after disease onset and in CSF samples at 2 weeks to 2 months after disease onset, indicating the patient’s previous contact with PRV (Technical Appendix Figure 4). Epstein-Barr virus, CMV, and PRV serologic tests were also conducted on control samples and ruled out the possibility of cross-reaction (Technical Appendix Table 2) (9,10). Although the patient experienced headache and fever during disease progression and CSF PRV antibody test was positive, routine tests, NGS, and PCR of the CSF all failed to disclose abnormality. Therefore, we do not have enough evidence to suggest possible PRV central nervous system infection. Considering epidemiologic history, clinical symptoms, and serologic and molecular testing results, we diagnosed PRV endophthalmitis.

The first 2 suspected cases of human PRV infection were reported in 1914, but detection of antibodies or cultivation of the virus had failed. In 1987, Mravak reported 3 suspected cases of human PRV infection with positive serum antibodies (2). All 3 patients were immunocompetent and their clinical manifestation occurred 1–3 weeks after possible animal contact. Initial symptoms included fever, sweating, and weakness; later, central nervous system symptoms developed. Some symptoms persisted for months, and serologic PRV antibodies were positive 5–15 months after the onset of clinical symptoms. In our study, the patient had similar symptoms, plus visual impairment and a unique infection route of PRV through direct exposure to contaminants.

Since 2011, prevalence of PRV infection among swineherds in China has risen several times (11). Among swineherds in Jiangxi Province, studies have shown varying positive rates for PRV DNA: from 5.5% to 26.5% during 2014, (12), and of positive PRV antibodies, from 84.4% to 89.9% during September 2013–September 2015 (13). PRV vaccine is still provided for swineherds on a voluntary basis rather than as a requirement in China, and swine were not vaccinated in the hoggery in which this patient worked at that time. On the day of disease onset, the patient’s eyes were directly contaminated with sewage containing pig excrement when cleaning pig sties. Although no previous study had reported a confirmed case of PRV-caused infectious endophthalmitis, the typical infectious route in this case made hoggery the most probable infectious source in this study.

NGS is marked by its rapid diagnostic ability to precisely identify certain pathogens in peripheral blood, respiratory, and CSF samples. In this case, NGS testing in facilitating the diagnosis of infective endophthalmitis is supported. The fact that real-time PCR and Sanger sequencing results were consistent with the NGS results further validated the credibility of this technique. Furthermore, a serologic test was conducted during the follow-up period; results showed that, even 5 months after symptom onset, the antibodies to PRV in plasma were still active, and the antibodies in CSF persisted during the entire follow-up period (Technical Appendix Figure 4). This result is similar to that reported in 1987, indicating that PRV antibodies may persist long after the initial infections.

In summary, this case of PRV-caused human infectious endophthalmitis indicates that PRV could affect humans through direct contact with pig contaminants. NGS of the vitreous humor provided a strong technical support for rapid diagnosis of PRV infection in this patient. However, the pathogenesis of PRV infection remains to be explored. This case stresses the importance of mandatory PRV vaccine among swineherds and the necessity for workers in the breeding industry to increase awareness of self-protection when handling animal containments.

Dr. Ai is a clinical resident at Huashan Hospital affiliated to Fudan University. Her research interests include the precision medicine of infectious diseases and the use of high throughput sequencing in assisting the rapid diagnosis of causative pathogens.

We thank the patient for cooperating with our investigation and acknowledge the professionalism and compassion demonstrated by all the healthcare workers involved in her care.

This study was supported by the New and Advanced Technology Project of Shanghai Municipal Hospital: Application of next generation sequencing technique in precise diagnosis of infectious diseases (SHDC12017104).