Lassa virus has been identified in 3 pygmy mice, Mus baoulei, in central Benin. The glycoprotein and nucleoprotein sequences cluster with the Togo strain. These mice may be a new reservoir for Lassa virus in Ghana, Togo, and Benin.

Lassa fever has recently emerged in Benin and Togo, where it had been unknown until 2014. In November 2014, two persons died of confirmed Lassa virus (LASV) infection at Saint Jean de Dieu Hospital, in Tanguieta, northern Benin. During January–February 2016, a second outbreak with 11 confirmed cases of Lassa fever occurred in the communes of Tchaourou and Parakou, department of Borgou, central Benin. These 11 cases were diagnosed at the Irrua Specialist Teaching Hospital (Irrua, Nigeria) and the Bernhard-Nocht Institute for Tropical Medicine (Hamburg, Germany). During the same period, 2 cases from neighboring Togo were also confirmed as Lassa fever (1,2).

In July 2016, to enable the affected countries to quickly detect new cases of Lassa fever, the Bernhard-Nocht Institute for Tropical Medicine and the German Ministry of Cooperation established LASV diagnostic capacity in Cotonou (Benin) and Lomé (Togo). In 2017, another 2 cases occurred in central Benin.

The need to understand the epidemiology of Lassa fever in Benin and the involvement of rodents in the transmission of the disease led us to investigate the small mammal community living in and around the dwellings in villages where the index case-patients lived. To identify these villages, a first expedition in October 2016 traced back confirmed and probable cases according to the health registers of the local hospital in Tchaourou and the teaching hospital in Parakou. An investigation of several villages enabled us to record some evidence from the nurses in the health centers.

On the basis of these findings, a second expedition in September 2017 used Sherman traps (https://www.shermantraps.com) to capture small mammals in 6 villages in Tchaourou. The animals were sampled in several habitats: houses (inside, 80 traps) and fields and savannah (outside, 120 traps). The animals were then killed with an overdose of halothane, and necropsies were performed in situ according to Biosafety Level 3 security procedures (3).

We collected blood and organs (including spleen and liver) and identified the animals morphologically, according to standard measurements: body weight; body, tail, hindfoot, and ear lengths. Because of possible sibling species among Mastomys spp. and Mus spp. rodents, we performed molecular identification through a PCR targeting cytochrome b. Distribution of the small mammals was 210 Praomys daltoni mice, 14 Mus baoulei mice, 12 Rattus rattus rats, 10 Lemniscomys striatus mice, 7 Mus mattheyi mice, 6 Mastomys natalensis mice, and 26 Crocidura spp. shrews (Appendix Table 1). The surprising finding was the scarcity of M. natalensis mice, the most probable reservoir of LASV; we trapped only 3 of these mice inside and 3 outside. In that area, the commensal rodent was P. daltoni, as is often found in Ghana and Nigeria (4,5).

We screened all samples for LASV by using 2 reverse transcription PCRs: 1 specific for LASV and 1 for panarenaviruses (6,7). The 2 tests enabled us to detect 3 LASV-positive animals, all pygmy mice (M. baoulei). To determine phylogeny more reliably than we could by using short fragments issued from the diagnostic tests, we performed additional PCRs on glycoprotein (GP) and nucleoprotein (NP) genes located on the small RNA segment (primers in Appendix Table 2). GP sequence of 1,408 nt and NP sequences of 1,654 nt were aligned with 31 LASV sequences belonging to all lineages. 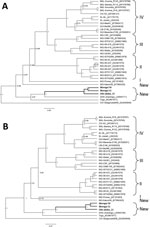 Figure. Bayesian phylogenetic analyses based on nucleotide sequences of the partial glycoprotein and nucleoprotein genes of Lassa virus (LASV), showing the placement of the new sequences (in boldface) isolated from Mus baoulei...

The phylogenetic analyses performed with a Bayesian approach on GP and NP alignments shows that the 3 new sequences (Worogui50, Worogui51, and Odo-Akaba13) clustered with Jirandogo76, from the same species (M. baoulie) collected in Ghana in 2011 (Figure). Furthermore, the analysis showed strong support with the strains from humans in Togo, which clustered with the sequences from humans in Benin (S. Günther, E. Fichet-Calvet, unpub. data). The differences between the 3 GP sequences in mice from Benin and the strain from humans in Togo ranged from 20.8% to 21.7% (8.5% to 10.3% at the amino acid level). Differences between NP sequences ranged from 22.2% to 25.7% (10.2% to 13.6% at the amino acid level). Jirandogo76 is closer to Togo on the NP tree, with a difference of 21% nt (8.9% at the amino acid level). These findings are consistent with past observations highlighting the high amino acid variability among LASV strains (9). This finding suggests that the sequences described for M. baoulei mice belong to the Lassa clade. Nevertheless, the node dividing the branches of the Togo strain from those of the newly identified LASV in M. baoulei mice is deep, suggesting that these strains diverged a long time ago by switching hosts between rodents and humans. Additional reservoirs could still be implicated in the recent events of LASV transmission to humans.

Our findings strongly point toward M. baoulei mice as a potential candidate for LASV spreading in Benin, Togo, and Ghana. Together with the multimammate mice M. natalensis and Mastomys erythroleucus and the soft-furred mouse Hylomyscus pamfi (10), the fourth rodent species reservoir of LASV is M. baoulei pygmy mice.

Dr. Yadouleton is a medical entomologist in the Centre de Recherche Entomologique de Cotonou, Benin, head of the Laboratoire des Fièvres Hémorragiques in Cotonou, and a teacher at the University of Natitingou, Benin. His research interests include mosquito control and the diagnosis of viral hemorrhagic fevers.

We express our gratitude to Eléonore Gandjeto and Lucien Toko, who facilitated our research in Benin. We are particularly grateful to the field assistants who participated in the rodent sampling: Moussa Fofana, Edwige Kpodo, Zita Sagbohan, and Morlaye Sylla.

Authorization for rodent trapping was granted by the Ministry of Agriculture (014/MAEP/SGM/DE/SSA/SE). This research was funded by the German Research Foundation (DFG FI 1781/2-1 and GU 883/4-1) and the Global Health Protection program, supported by the Federal Ministry of Health (ZMVI1-2516-GHP-704).