Molecular Epidemiology of Hantaviruses in the Czech Republic

The most prevalent hantaviruses in Europe are Tula virus, Puumala virus (PUUV), and Dobrava-Belgrade virus (DOBV), all orthohantaviruses; PUUV and DOBV cause hemorrhagic fever with renal syndrome (1). Four DOBV genotypes of different virulences in humans are known: the nonpathogenic Saaremaa; Kurkino, which causes mostly mild disease; and Dobrava and Sochi, which are both highly pathogenic (2).

During 2010–2017, we collected 1,551 wild rodents from different locations of the Czech Republic: 618 yellow-necked mice (Apodemus flavicollis), 37 wood mice (A. sylvaticus), 222 striped field mice (A. agrarius), 445 bank voles (Myodes glareolus), 40 common voles (Microtus arvalis), and 189 field voles (Microtus agrestis). We trapped all rodents as specified by the Animal Protection Act No. 246/1992 of the Czech Republic. Moreover, we obtained 61 clinical samples acquired from patients with hantavirus infections during 2008–2018; these hantavirus diagnoses were based on serologic testing (detection of hantavirus-specific IgG and IgM) and clinical and laboratory findings (fever, renal dysfunction, thrombocytopenia). 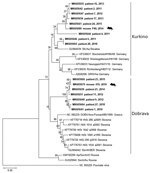 Figure. Phylogenetic tree constructed with partial 195-bp fragments of the DOBV large segment from humans and mice, Czech Republic, 2010–2018. Sequences from this study (bold) were compared with available sequences from the...

Most Dobrava-positive patients were from the mountain regions Jeseniky (northwest Silesia) and Beskydy (south Silesia), whereas Kurkino cases occurred in the lowlands between these 2 mountain regions (Appendix Figure). The only confirmed fatal DOBV case in the Czech Republic was in a patient living in Kladno District, Central Bohemia region (6). The geographic distribution of DOBV genotypes seems to be linked with the distribution of Apodemus spp. mice (10). The higher number of hantavirus cases in Silesia might be caused by an increased prevalence of DOBV in rodents or could be the result of an increased awareness of DOBV among local physicians.

Ms. Zelena is a medical microbiologist serving as head of the National Reference Laboratory for Arboviruses at the Institute of Public Health, Ostrava, Czech Republic, and a doctoral candidate at the University of Defence in Hradec Kralove, Czech Republic. Her primary research interests are vectorborne viral diseases and zoonoses.

We would like to thank Hana Blazejova, Lenka Betasova, Kristyna Venclikova, and Juraj Pesko for technical assistance during animal trapping and dissections.

This research was partially funded by the Budget Chapter of the Czech Ministry of Education, Youth, and Sports for specific higher education research. The authors acknowledge financial support from Project FIT (Pharmacology, Immunotherapy, nanoToxicology; no. CZ.02.1.01/0.0/0.0/15_003/0000495, to T.K. and D.R.), which is funded by the European Regional Development Fund and the Czech Ministry of Agriculture (RO0518).

Molecular Epidemiology of Hantaviruses in the Czech Republic