In Africa, the prevalence of disease caused by Aedes mosquito–borne virus infections might be similar to that in the Americas (1,2). However, the transmission and genetic diversity of arthropodborne viruses (arboviruses) in Africa remains poorly understood because of a paucity of systematic surveillance. Moreover, syndromic surveillance might confound symptomatically similar illnesses, and serologic diagnostic tests can be misleading because of cross-reactivity between related circulating flaviviruses (3). Improved viral genomic surveillance can assist in better understanding viral transmission dynamics in Africa.

During 2013, Angola experienced a large dengue outbreak that was concentrated in Luanda Province (4). Cases detected in travelers returning from Angola to other parts of the world showed that the virus rapidly disseminated from Angola to Europe, Asia, and the Americas (5). Although infections were predominantly caused by dengue virus (DENV) serotype 1 (6), all DENV serotypes were reported in returning travelers from Angola (7).

Although dengue is probably endemic in Angola, patterns of DENV transmission in the country outside the 2013 epidemic are poorly characterized. The lack of genomic characterization restricts our understanding of DENV diversity within Angola and the frequency and directionality with which DENVs are exchanged with other countries. Although enhanced viral genomic sequencing capacity can improve outbreak detection and response, acquiring this tool remains challenging for many public health laboratories because of the high startup costs of traditional bench-top sequencing (8). Recent technologic advances now permit more affordable sequencing using the MinION portable sequencer (Oxford Nanopore Technologies, https://nanoporetech.com). We used a combination of portable sequencing and genetic analysis to characterize the causative lineage of a DENV outbreak in Luanda.

To investigate the timing and frequency of dengue occurrence in Angola, we conducted rapid diagnostic tests by using the SD Bioline Dengue Duo kit (Alere, https://www.alere.com) to detect the presence of dengue-specific IgM, IgG, and, since January 2017, nonstructural protein 1 (NS1) (Appendix Figure). During January 1, 2016–May 15, 2018, we collected samples from 6,839 patients (3,276 male, 3,563 female) in central Luanda for whom a physician suspected dengue as the cause of an illness with symptoms consistent with DENV infection. Samples were originally obtained for routine diagnostic purposes from persons visiting local clinics. Thus, we used residual samples without informed consent, with ethics approval from the National Ethical Committee of the Angola Ministry of Health. 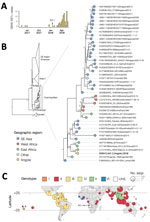 We identified 80 DENV NS1–positive cases among the tested samples (Appendix Figure). The first confirmed infections were detected in May 2017, and the number of cases appeared to peak around May 2018 (Figure, panel A).

We tested 153 randomly selected serum samples (IgG, IgM, or NS1-positive) collected during July 21, 2017–January 31, 2018, for DENV RNA by using real-time quantitative reverse transcription PCR (qRT-PCR) at the Instituto Nacional de Investigação em Saúde (INIS) in Luanda, Angola. We used the US Centers for Disease Control and Prevention’s DENV1–4 Real-Time RT-PCR assay kit on an Applied Biosystems 7500 Fast Real-Time PCR System (https://www.thermofisher.com), according to the manufacturer’s instructions (7). Of these 153 samples, 1 (isolate AO-1) yielded a qRT-PCR cycle threshold of 22.5 for DENV serotype 2 (DENV-2). This sample was obtained from a 48-year-old man living in Luanda who visited a clinic on January 18, 2018. The patient reported traveling to Mussulo Island, a resort 30 km from Luanda, during December 24, 2017–January 2, 2018.

We subjected the qRT-PCR–positive sample to viral genomic amplification and sequencing by using a multiplex PCR primer scheme designed to amplify the entire coding region of DENV-2. We aligned published genomes of nonsylvatic DENV-2 and used them to generate a 90% consensus sequence that formed the target for primer design. We designed primers that generated overlapping amplicons 980 bp in length with an overlap of 20 bp as previously described (9; Appendix Table). Details of cDNA synthesis, multiplex PCRs, library preparation, sequencing, and generation of consensus sequences are described in the Appendix.

We originally used the 90% consensus sequence as a reference genome for mapping sequencing reads, but we later refined this reference to a more appropriate reference genome (GenBank accession no. LC121816) by using BLAST (http://www.ncbi.nlm.nih.gov/BLAST) to identify DENV sequences with high identity to the provisionally mapped data. The median sequencing depth was 11,448 reads, and 75% of the genome had a depth of at least 2,419 reads. In total, we sequenced 96% of the coding region of DENV-2 (isolate AO-1; GenBank accession no. MH460898). Raw and processed data are available on GitHub (Appendix).

We constructed phylogenetic trees to explore the relationship of the sequenced AO-1 genome to those of other isolates. We retrieved 1,395 DENV-2 genome sequences with associated date and country of collection from GenBank. From this dataset, we generated a subset that included all 35 identified sequences from Africa, 200 globally sampled sequences (randomly sampled from the remaining 1,360 sequences), and the novel AO-1 sequence. We aligned these sequences by using MUSCLE, as implemented in Geneious 9.0.5 (10). We constructed a maximum-likelihood phylogenetic tree by using a general time-reversible model with gamma distributed among site rate heterogeneity (4 categories) in RAXML version 8.2.10 (11). We performed 500 nonparametric bootstrap replicates to evaluate statistical support for phylogenetic nodes. We also constructed a phylogeny that includes additional partial gene sequences (Appendix).

Phylogenetic estimation strongly supports placement of the isolate from Angola in the cosmopolitan genotype of DENV-2 (Figure, panel B). The Angola strain forms part of a well-supported monophyletic clade that comprises genomes sampled in East Africa and is most closely related to DENV isolated from a returning traveler from this region. Viruses from this clade have been present in East Africa since at least 2013 (Figure, panel B).

To explore the global distribution of the DENV-2 cosmopolitan genotype and identify geographic gaps in DENV genomic surveillance that might bias phylogenetic interpretation, we generated maps of the distribution of currently available DENV sequence data. We downloaded from GenBank all DENV sequences >100 bp of any serotype with known location of sampling (including those from returning travelers). We genotyped DENV-2 sequences by using the Genome Detective online classification tool (http://www.genomedetective.com). Most sequenced DENVs in Africa belong to DENV-2 (49%), of which 70% belong to the cosmopolitan genotype (Figure, panel C). We found that although 16% of all global clinically apparent dengue infections have been estimated to occur in Africa (2), DENV serotype 1–4 sequences from Africa currently represent <1% of the available global DENV sequence data. No data exist from the Democratic Republic of the Congo, which has been epidemiologically linked with Angola during past arbovirus outbreaks (12). Additional data will help to address transmission dynamics of DENV-2 in Angola and identify common routes of virus importation into the country.

The DENV-2 portable sequencing approach we describe represents a useful tool for genomic characterization and molecular epidemiology of outbreaks in Africa and elsewhere. On the basis of phylogenetic evidence and the geographic distribution of detected genotypes, the DENV-2 cosmopolitan genotype detected in Angola is probably endemic in Africa. The AO-1 genome we analyzed probably represents an early transmission event from an ongoing DENV-2 epidemic in Luanda. Further sequencing of DENV in the region is required to determine whether the cosmopolitan genotype is endemic to Angola or if it represents a more recent introduction from elsewhere (e.g., East Africa or other unsampled locations).

Dr. Hill is a postdoctoral researcher at the University of Oxford, United Kingdom. She studies the genomic epidemiology of mosquitoborne viruses, including yellow fever virus, Zika virus, and dengue virus.

We would like to thank all the patients involved and the staff who assisted with sample collection.

This work forms part of the ArboSPREAD project.