In 2016, an outbreak of Chlamydia avium infection occurred among Picazuro pigeons (Patagioenas picazuro) living in an aviary in the Netherlands. Molecular typing revealed a unique strain of C. avium. Our findings show that C. avium infection, which usually causes subclinical infection, can cause fatal disease in pigeons.

Until approximately 2014, Chlamydia psittaci was the only Chlamydia species detected in birds. Researchers have catalogued »465 bird species affected by this pathogen, which mainly causes subclinical infections but sometimes results in acute disease and death (1). In humans, C. psittaci is highly infectious and can cause severe pneumonia. Chlamydia bacteria, which are present in (dried) excreta or feather dust, are transmitted through direct contact or inhalation. In 2014, researchers proposed 2 new members of Chlamydiaceae: C. avium and C. gallinacea (2). C. avium affects pigeons and psittacine birds, whereas C. gallinacea affects poultry. Most C. avium and C. gallinacea infections in birds are subclinical, and the zoonotic potential of these species is unknown (3).

In 2016, an outbreak of C. avium infection occurred among 11 Picazuro pigeons (Patagioenas picazuro) housed in an aviary with other bird species in the Netherlands. The birds lost weight, had ruffled feathers, and were anorexic. Despite treatment with fluids, force-feeding, and in 1 bird, doxycycline treatment (50 mg/kg 1×/d), all 11 animals died or were euthanized. Necropsy revealed that 9 of these birds were in poor physical condition, lacking fat and pectoral muscle mass. The livers and spleens were enlarged; the livers extended an average of 0.5 cm beyond the rear edge of the sternum, whereas the mean diameter of the spleens was 1.0 cm, approximately twice as large as the normal size. We suspected Chlamydia infection because of intracellular inclusions in Stamp (modified Ziehl Neelsen)–stained cytology of liver and spleen. We found multifocal heterophilic and lymphoplasmacytic infiltrates with necrosis in the liver and lymphoid depletion with necrosis and heterophilic infiltrates in the spleen. We stained slides with polyclonal antibodies against Chlamydia (bioMérieux, https://www.biomerieux.com) after a standard Avidin Biotin Complex protocol (4); liver and kidney tissues from 7 birds tested positive for Chlamydia. We did not observe any histologic changes consistent with viral inclusions or bacterial infection.

Because psittacosis in birds is a notifiable disease in the Netherlands, we informed public health authorities of our results. We forwarded frozen tissue samples to the Wageningen Bioveterinary Research institute to confirm C. psittaci infection. We also collected and forwarded 2 Picazuro pigeon carcasses and 3 pooled fecal samples from contact birds (i.e., Roseate spoonbill [Platalea ajaja], Puna ibis [Plegadis ridgwayi], and Scarlet ibis [Eudocimus ruber]), from the aviary. Two liver samples, 2 conjunctival and cloacal swabs, and 3 pooled fecal samples initially tested negative for C. psittaci, C. abortus, C. felis, and C. caviae in a PCR selective for the ompA gene. Because the liver and kidney samples of 7 pigeons tested positive for antibodies against Chlamydia, we submitted samples from all 11 pigeons and the 3 pooled fecal samples for further testing with real-time PCR selective for the 23S gene of Chlamydiaceae (5) and a duplex real-time PCR selective for C. gallinacea and C. avium (3,6). All 11 pigeons tested positive for C. avium in >1 samples of conjunctiva, cloaca, liver or intestines. The pooled fecal samples of contact birds tested negative in a PCR for Chlamydiaceae (Appendix). 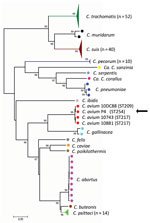 We used Buffalo green monkey cells to isolate Chlamydia from the spleen of 1 of the pigeons that tested positive. Multilocus sequence typing using the concatenated sequences of 7 housekeeping genes revealed that this isolate is a unique sequence type, 254, that is closely related to the other 3 C. avium strains previously described (2) (Figure).

The clinical signs, histopathologic results, and positive intralesional immunohistochemistry findings (Appendix) showed that the birds had generalized disease consistent with a Chlamydia infection. Real-time PCR revealed an infection with C. avium. Further analysis with multilocus sequence typing showed the isolated strain is unique, but most closely related to other reported C. avium strains. C. avium has been detected mainly in urban or feral pigeons without clinical signs and in co-infections of feral pigeons with C. psittaci (2).

Our results show that C. avium strains might also cause severe, potentially fatal infections in birds. Data on C. avium are limited, but several factors might explain the severity of the clinical signs. Unlike previously reported cases, these pigeons were held in captivity. Furthermore, we cannot exclude possible differences in virulence between sequence types of C. avium. No human cases were reported during this outbreak, so the zoonotic potential of C. avium remains unknown.

Dr. Kik is a veterinary pathologist at Utrecht University. Her research interests include the pathology of exotic animals and wildlife.

We thank Rachel Thomas for proofreading. We also thank Frank Harders and Annemieke Dinkla for their technical assistance in DNA isolation and sequencing.

This work was partly funded by the Dutch Ministry of Agriculture, Nature and Food Quality (grant no. WOT-01-002-005.02).

Page created: July 15, 2020
Page updated: September 17, 2020
Page reviewed: September 17, 2020
The conclusions, findings, and opinions expressed by authors contributing to this journal do not necessarily reflect the official position of the U.S. Department of Health and Human Services, the Public Health Service, the Centers for Disease Control and Prevention, or the authors' affiliated institutions. Use of trade names is for identification only and does not imply endorsement by any of the groups named above.