A 63-year-old male patient was sent to the University Hospital for Infectious Diseases in Zagreb, Croatia, in September 2017 for treatment of cystic liver lesions and pleural effusion. The patient had grown up and still lived in a rural area in Vukovar (45°21′N, 18°59′E/45.35°N, 18.99°E), where he worked for a waste management company. He spent free time in the woods picking mushrooms.

Before his referral, in November 2014, the patient underwent kidney ultrasonography, which also detected cystic formations in his liver. A subsequent multislice computed tomography (MSCT) scan in a regional hospital revealed an oval heterogeneous zone in the liver measuring 11 × 8 cm with irregular postcontrast enhancement and an enlarged right suprarenal gland that could not be distinguished from the outer wall of the inferior vena cava. His laboratory results, including tumor markers, were within reference ranges, except for a slightly elevated alkaline phosphatase level.

In 2016, the patient had a bronchoscopy, which showed no malignancy. He had a third diagnostic liver biopsy in October 2016, which revealed acellular, eosinophilic, periodic acid-Schiff–positive histopathology, and morphology that suggested echinococcosis. However, the patient was not seen by an infectious disease physician, nor did he receive treatment for parasites. 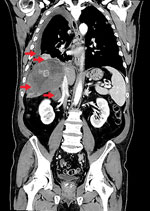 An examination in August 2017 showed that his lung nodules had progressed, and a right-sided pleural effusion had enlarged. One month later, the patient’s condition worsened. He had a fever (39°C), dyspnea, cough, and sharp pain in the right hemithorax. He was referred to the hospital, where we conducted a cystic lesion biopsy, which indicated suppurative inflammation, but a culture was negative for bacteria. The patient’s pleural effusion had eosinophilic exudate, which was negative for bacteria and fungi. The patient had eosinophilia with an average eosinophil count of 2,600 × 109 cells/L. We analyzed his prior MSCT and magnetic resonance scan results and noted the patient had experienced slow progression of alveolar echinococcosis. The liver lesion had grown from 11 × 8 cm to 13 × 12 × 12 cm during the previous 2.5 years, and the parasite had infiltrated his lungs and right adrenal gland (Figure).

We extracted DNA from pleural exudate and formalin-fixed, paraffin-embedded liver biopsy tissue by using the QIAamp DNA Mini QIAcube system (QIAGEN, https://www.qiagen.com). We subjected duplicate samples to PCR and sequenced a 200-bp region in the mitochondrial gene nad1 (1) and a 395-bp region of the 12S rRNA gene (2). All sequences were identical to isolates of E. multilocularis tapeworms from Europe found in GenBank (accession nos. MG755265, MG755266).

The patient refused surgery and was treated with oral albendazole (400 mg 2×/d) and intravenous piperacillin/tazobactam (4.5 g 4×/d) for 6 weeks. At discharge, we recommended continued albendazole until clinical and radiologic follow-up 6 months later.

No previous human cases of alveolar echinococcosis have been reported in Croatia, but the E. multilocularis tapeworm is endemic in central and eastern Europe and in the Baltic states (4). This patient’s infection is surprising because he lived >60 years in eastern Croatia with no international travel. The closest reported autochthonous human cases were in southwestern Hungary (5).

E. multilocularis tapeworms have been reported in foxes in western and central Croatia (6) and likely is in eastern areas, such as Vukovar, because it was found in 17.9% of foxes and 14.3% of golden jackals in the region of Serbia directly across the Danube River from Vukovar (7). Since 2013, rabies vaccination has increased in Croatia, which might give the fox population an opportunity to expand and increase transmission of E. multilocularis tapeworms to humans, as noted in Switzerland (8).

Dr. Dušek is an attending physician in the University Hospital for Infectious Diseases in Zagreb, Croatia. Her research interests include viral hepatitis and infectious diseases in immunocompromised patients, especially patients with solid organ or stem cell transplants.