Spiroplasma is a genus of Mollicutes, a class of bacteria without cell wall. Spiroplasma are intracellular organisms with helical morphology and a small genome (0.78–2.2 Mb) comprising 38 species isolated from insects, crustaceans, and plants (1,2). Ticks, from which Spiroplasma ixodetis has been isolated, are abundant sources of Spiroplasma (3).

Spiroplasma develop a commensal, pathogenic, or mutualist pathogen–host relationship. The first isolated species (S. citri) was described in 1973 (4,5). Two Spiroplasma infections have been reported in humans: an intraocular infection in a newborn with Group VI Spiroplasma, now known as S. ixodetis (6), and a systemic infection in an immunocompromised adult with S. turonicum (7). These reports suggest that tetracyclines and macrolides are effective against Spiroplasma (6,7). We describe 3 newborns in France who had cataract and intraocular inflammation and in whom S. ixodetis was detected in ocular samples (Table). 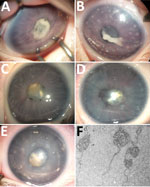 Figure 1. Ocular anterior segment in 3 newborn infants with bilateral total cataract and anterior uveitis related to endogenous Spiroplasma ixodetis infection. A, B) Case-patient 1. Right (A) and left (B) eyes of... 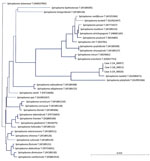 In January 2018, bilateral leukocoria caused by bilateral congenital cataract was detected in an otherwise healthy boy, case-patient 2, on day 3 after full-term birth (birthweight 2,900 g; Apgar score 10). Pregnancy was unremarkable, without maternal seroconversion for toxoplasmosis, rubella, herpes simplex viruses 1 and 2, or cytomegalovirus. Six weeks after birth, ophthalmologic examination under anesthesia revealed a total cataract in each eye with large keratic precipitates, posterior synechiae, and immature dilated iris vessels (Figure 1, panels C, D). Fundus was inaccessible in both eyes. The right eye was slightly microphthalmic. Because of the rarity of uveitis with keratic precipitates and cataract in newborns and the similarity to case-patient 1, the child underwent bilateral cataract extraction without lens implantation, and lens material was sent for bacteriologic investigations. The 16S-rRNA–based PCR of the rrs gene identified in both eyes was 98.6% similar to S. ixodetis. Mild, self-resolving bilateral intravitreal hemorrhage developed after cataract surgery. Anterior segment inflammation resolved under topical dexamethasone (4 drops/d with progressive tapering over 3 months) and atropine (0.3%, 1 drop/d for 1 month) and did not recur over the next 18 months.

We conducted all PCRs in Spiroplasma DNA–free facilities. Internal negative controls were introduced during DNA manipulation/amplification (Appendix). No control was positive after 16S-rRNA PCR amplification, confirming that the detection of Spiroplasma sequences did not result from contamination.

To confirm that S. ixodetis is absent in intraocular media of newborns with noninflammatory cataracts, we collected crystalline lens samples from 5 newborns with congenital cataracts who underwent surgery before 6 months of age (Table). 16S rRNA–based PCR did not identify any bacterial signature in these samples. The Internal Review Board of the French Society of Ophthalmology approved this study.

Until recently, Spiroplasma spp. were considered nonpathogenic in humans. Our observations confirm the reports by Lorenz et al. of an intraocular Spiroplasma spp. infection (6), and by Aquilino et al. of a systemic infection (7). Moreover, the congenital presentation of case-patients 1–3 suggests maternal–fetal transmission during pregnancy or delivery, despite the absence of maternal symptoms. Our findings are consistent with those of Lorenz et al., who described a premature baby born at 27 weeks’ gestation who, at 4 months of age, had unilateral uveitis with corneal precipitates, posterior synechiae, and cataract. After cataract surgery, bacterial 16S-rRNA PCR of vitreous and lens aspirates identified Spiroplasma spp. Group VI (6), now referred to as S. ixodetis (9). Electron microscopy visualized filamentous and helical microorganisms compatible with Spiroplasma.

Another clade of Spiroplasma, S. mirum, phylogenetically close to S. ixodetis (Figure 2), initially named suckling mouse cataract agent (9,10), induces rapid cataract formation after intracerebral injection in newborn mice (11), rats (12), and rabbits (13), with variable intraocular inflammation. In these models, adult animals do not develop ocular pathology, suggesting a vulnerability of the immature eye to Spiroplasma infection. Moreover, a high rate of microphthalmia developed in these animals, as in case-patient 2, suggesting that Spiroplasma infection might interfere with ocular development.

Our observations suggest that intrauterine or early postnatal contamination with Spiroplasma spp. might lead to unilateral or bilateral cataract and anterior uveitis in newborns. A similar causative S. ixodetis subtype was identified in all 3 infants, without technical contamination. Two of 3 case-patients lived in a rural area adjacent to a forest.

The frequency of this intraocular infection in newborns may be underestimated. Spiroplasma are fastidious organisms detectable using PCR techniques not routinely performed on intraocular samples. Because affected infants are at high risk for visual impairment or blindness, pediatricians, ophthalmologists, and microbiologists should be aware of possible S. ixodetis ocular infections and collect clinical, bacteriologic, and epidemiologic data on this emerging pathogen. The mechanisms and timing of probable maternal–fetal transmission require further investigations. On the basis of these observations, we recommend systematic bacterial 16S-rRNA PCR analysis on intraocular fluids and lens material from neonates with cataract and uveitis.