After a sharp decrease of influenza A(H7N9) virus in China in 2018, highly pathogenic H7N9 viruses re-emerged in 2019. These H7N9 variants exhibited a new predominant subclade and had been cocirculating at a low level in eastern and northeastern China. Several immune escape mutations and antigenic drift were observed in H7N9 variants.

Since emerging in China in 2013, influenza A(H7N9) viruses have continued to circulate in mainland China, sporadically causing human infection (1–3). As of February 2020, a total of 1,568 laboratory-confirmed human cases and 616 related deaths had been reported, for a fatality rate of ≈40% (http://www.fao.org/ag/againfo/programmes/en/empres/H7N9/situation_update.html). In mid-2016, a highly pathogenic avian influenza (HPAI) virus of subtype H7N9 emerged, and the number of cases in humans began to rise sharply during a fifth wave (4,5). Animal studies indicated that these HPAI H7N9 viruses are highly virulent in chickens and have gained transmissibility among ferrets (5–7). Also, the cocirculation of HPAI (H7N9) viruses caused high genetic diversity and host adaption (8), posing public health concerns.

Although HPAI H7N9 viruses spread widely across China in 2017 (8,9), after an influenza H5/H7 bivalent vaccine for poultry was introduced in September 2017, the prevalence of the H7N9 viruses in birds and humans decreased dramatically (6,10). In early 2019, when the novel HPAI H7N9 viruses re-emerged, the isolation of HPAI H7N9 viruses from birds revealed them to be responsible for continuous epidemics in northeastern China (11). In March 2019, a human death in Gansu, China, was confirmed to have been caused by an H7N9 virus (12). To explore the prevalence and evolution of influenza A(H7N9) viruses, we sequenced 28 hemagglutinin (HA) and neuraminidase (NA) genes of poultry-origin H7N9 viruses circulating in China during 2019. 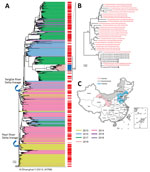 During January–December 2019, we conducted poultry surveillance for influenza virus at live poultry markets in 15 provinces of China (Appendix Figure 9). We isolated 28 H7N9 viruses from tracheal and cloacal swab samples of chickens in Shandong, Hebei, and Liaoning Provinces (Figure 1, panel C; Appendix Table 1). Vaccination of all chickens in China was compulsory according to the Ministry of Agriculture and Rural Affairs of the People’s Republic of China. We sequenced the HA and NA genes of 28 H7N9 viruses and submitted the sequences to GISAID (https://www.gisaid.org) (Appendix Table 2). All H7N9 viruses had 4 continuous basic amino acids at cleavage sites (i.e., KRKRTAR/G and KRKRIAR/G), suggestive of high pathogenicity. Phylogenic analysis demonstrated that the HA and NA genes of all of these HPAI H7N9 viruses belonged to the Yangtze River Delta lineage and formed a new subclade (Figure 1, panel A), which exhibited a long genetic distance to the HPAI H7N9 viruses that persisted during 2017–2018. In particular, the HA and NA genes of A/chicken/northeast China/19376-E5/2019(H7N9), A/chicken/northeast China/19254/2019(H7N9), and A/chicken/northeast China/LN190408A/2019(H7N9) were genetically closely related to the human-infecting influenza A(H7N9) viruses from Gansu (Figure 1, panel B; Appendix Figures 1–3), implying the potential risk for the reemerged HPAI H7N9 viruses to infect humans. 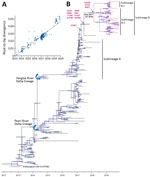 Figure 2. Time-scaled evolution of influenza A(H7N9) viruses, China. A) Analysis of root-to-tip divergence against sampling date for the hemagglutinin gene segment (n = 189). B) Maximum clade credibility tree of the hemagglutinin...

Although no substantial difference surfaced in the substitution rate of HA genes between H7N9 viruses during 2017–2018 and the viruses during 2019, the increased substitution rate occurred in the first and second codons of reemerged HPAI H7N9 viruses (Appendix Table 4). In a maximum clade credibility tree of the HA gene, 9 independently occurring mutations gave rise to the new sublineage-B circulating in 2019, including A9S, R22K, E71K, I78V, T116K, V125T, A151T, K301R, D439N (H7 numbering, https://www.fludb.org/brc/haNumbering.spg) (Figure 2, panel B), and only the V125T and A151T substitutions of the HA protein were reported as immune escape mutations (13). In addition, sublineage B-1 appeared to have acquired 3 parallel K184R, I499V, I520T (H7 numbering) mutations. The prevailing K184R substitutions of HPAI H7N9 viruses occurred during 2019. The K184R mutation was located in the antigenic site B and receptor binding region (Appendix Figure 6), suggesting that K184R was a potential mediator of viral antigenicity.

Next, we evaluated the protective efficacy of the new candidate H7N9 inactivated vaccine (H71903)—that is, reverse genetic recombinant carrying HA and NA of A/chicken/east China/H7SD12/2019(H7N9) with internal genes of A/duck/Guangdong/D7/2007(H5N2)—in chickens against the challenge of 4 HPAI H7N9 viruses prevailing in sublineage B in 2019. All of the control chickens challenged with the H7N9 viruses died within 6 days of challenge (Appendix Figure 8). However, virus shedding was not detected from any of the vaccinated chickens challenged with H7N9 viruses (Appendix Table 3), indicating that the new candidate H7N9 vaccine could provide sound protection for chickens against challenge with these reemerged H7N9 variants.

Our findings highlight that the HPAI H7N9 viruses that reemerged during 2019 had been cocirculating at a low level in eastern and northeastern China after the vaccination strategy was implemented. These HPAI H7N9 viruses continued to evolve and showed antigenic drift, posing a public health concern. Although vaccination can largely control the occurrence of H7N9 virus outbreaks, it can also accelerate the generation of novel variants. Therefore, comprehensive surveillance and enhancement of biosecurity precautions should be undertaken immediately to prevent the influenza virus epidemic from becoming a pandemic.

Dr. Zhang is a PhD student at South China Agricultural University, Guangzhou, China. His research interests are the epidemiology and pathogenesis of emerging and re-emerging infectious diseases.

We acknowledge all contributors who submitted the sequence data on which this research is based to the GISAID EpiFlu Database. All submitters of data may be contacted directly through the GISAID website (http://www.gisaid.org).

Page created: June 12, 2020
Page updated: July 19, 2020
Page reviewed: July 19, 2020
The conclusions, findings, and opinions expressed by authors contributing to this journal do not necessarily reflect the official position of the U.S. Department of Health and Human Services, the Public Health Service, the Centers for Disease Control and Prevention, or the authors' affiliated institutions. Use of trade names is for identification only and does not imply endorsement by any of the groups named above.