We applied a new serosurveillance tool to estimate typhoidal Salmonella burden using samples collected during 2020 from a population in Juba, South Sudan. By using dried blood spot testing, we found an enteric fever seroincidence rate of 30/100 person-years and cumulative incidence of 74% over a 4-year period.

Enteric fever, caused by Salmonella enterica serovars Typhi and Paratyphi, causes substantial illness and death globally (1). However, estimating the population-level burden of infection is challenging. Blood culture, the standard for both diagnosis and surveillance, requires microbiological laboratory facilities that are not available in many low- and-middle-income countries. Challenges in accessing blood culture, along with an estimated diagnostics sensitivity of only 60% (2), contribute to chronic underdetection (3).

We used dried blood spots (DBS) collected for a SARS-CoV-2 serosurvey in Juba, South Sudan, enrolled during August 7–September 20, 2020; enrollment and sampling methods are described elsewhere (13). In brief, 2-stage cluster sampling was used to randomly select households from predefined enumeration units from 6 administrative divisions within and surrounding Juba; all persons >1 year of age and residing for >1 week within the sampled household were eligible to participate. Capillary blood was collected onto Whatman 903 Protein Saver cards (Sigma-Aldrich, https://www.sigmaaldrich.com), air dried, and transported at ambient temperature to Massachusetts General Hospital (Boston, MA, USA), where they were stored at 4°C. We tested all banked samples collected from participants <25 years of age and a random sample of participants >25 years of age. Younger participants were prioritized because they matched the age distribution of typhoid case data used for the seroincidence estimation (12). The study protocol was approved by ethical review boards with the South Sudan Ministry of Health and Massachusetts General Hospital.

We used kinetic ELISAs to quantify HlyE IgA and IgG levels in eluted DBS as described (7,11). To estimate seroincidence, we used the antibody dynamics from a longitudinal cohort of 1,420 blood culture–confirmed enteric fever cases (12). In brief, we created a likelihood function for observed cross-sectional population antibody response data based on antibody dynamics after blood-culture confirmed infection. We generated joint incidence estimates by combining the likelihood for HlyE IgA and IgG for each age stratum using age-specific antibody dynamics. We selected age strata to match incidence estimates from blood culture enteric fever surveillance studies in other countries in sub-Saharan Africa and South Asia (14,15). This method incorporates heterogeneity in antibody responses and explicitly accounts for measurement error and biologic noise (12; Appendix reference 16).

We used 3 US populations to define the distribution of biologic noise (nonspecific antibody binding): 48 children 1–5 years of age who had relatives with celiac disease, enrolled nationwide; 31 healthy controls, children and young adults 2–18 years of age, enrolled at Massachusetts General Hospital (Appendix reference 17); and a population-based sample of 205 children and adults 3–50 years of age from a SARS-CoV-2 serosurvey in northern California, USA. We used the same method to generate individual-level incidence estimates of HlyE IgA and IgG responses and used the exponential probability distribution to calculate 2- and 4-year cumulative incidence. We then fit age-dependent curves by using generalized additive models (Appendix reference 18) with a cubic spline for age and simultaneous 95% CIs using a parametric bootstrap of the variance-covariance matrix of the fitted model parameters (Appendix reference 19). 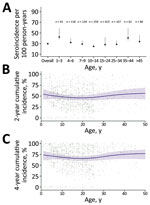 Using banked DBS collected for a SARS-CoV-2 serosurvey, we applied a new serosurveillance tool to rapidly estimate the burden of enteric fever in a region with no blood culture surveillance. We estimated an incidence rate of 30.0 infections/100 person-years and found >70% of the sampled population was infected in the previous 4 years.

The analytic approach is an improvement over cutoff-based methods because we can combine information from HlyE IgA and IgG responses to generate a consensus incidence estimate, accounting for heterogeneity in antibody responses, measurement error, and biologic noise. Whereas the cutoff-based method yielded a seroprevalence of nearly 100% for HlyE IgG, we generated cumulative incidence estimates over a precise time window and could identify populations with recent and later infections.

Limitations of this study include that only 1,840 samples of 2,214 enrolled study participants had linked age data. Second, persons in internally displaced camps were not included in the serosurvey. Displaced persons have been identified as high-risk populations for enteric infections, so it would be valuable to include them in future studies to determine if this population is at higher or equivalent risk (4). Finally, we used longitudinal antibody kinetics estimates from enteric fever cases in Bangladesh, Pakistan, Nepal, and Ghana. We did not observe major differences in the kinetics of antibody responses across countries (12), but the decay rate among enteric fever cases in Juba may be different because of the high force of infection and differences in exposure to other infections.

Dr. Aiemjoy is an assistant professor of epidemiology at the University of California Davis School of Medicine. Her research centers on measurement, surveillance, and diagnostics for infectious diseases with a focus on seroepidemiologic methods to understand the force of infection in populations.

We gratefully acknowledge Julie Parsonnet, Catherine Ley, Alessio Fasano, Maureen M. Leonard, and Victoria Kenyon for generously sharing banked samples to define the distribution of antibody responses among individuals with no prior exposure to typhoidal Salmonella.

Accompanying code and de-identified data are available on Github (https://github.com/UCD-SERG/SSudanTyphoidSeroIncidence).

This work was supported by the World Health Organization’s Unity Studies, a global seroepidemiologic standardization initiative, with funding provided by the COVID-19 Solidarity Response. This study was also supported by The Bill and Melinda Gates Foundation (INV-000572) and the US National Institutes of Health (R01AI134814).

Page created: October 13, 2022
Page updated: October 24, 2022
Page reviewed: October 24, 2022
The conclusions, findings, and opinions expressed by authors contributing to this journal do not necessarily reflect the official position of the U.S. Department of Health and Human Services, the Public Health Service, the Centers for Disease Control and Prevention, or the authors' affiliated institutions. Use of trade names is for identification only and does not imply endorsement by any of the groups named above.