The Bacillus cereus group of bacteria is a complex of closely related species with varying pathogenic potential (1). Notable members, as defined in the US Food and Drug Administration’s Bacteriological Analytical Manual, include B. anthracis, an etiologic agent of anthrax, and B. cereus, which has been associated with numerous illnesses, including foodborne emetic intoxication, diarrheal toxicoinfection, anthrax-like illness, and nongastrointestinal infections (1–5).

Whole-genome sequencing (WGS) is used increasingly in clinical and industrial microbiology laboratories to characterize B. cereus group strains (6). However, interpreting WGS results from these organisms is challenging; insights derived from WGS may conflict with information provided by traditional microbiologic assays (6–8). Previously, we hypothesized that results from some WGS-based species classification methods can be easily misinterpreted when applied to the B. cereus group (7). Here, we show that this scenario is not hypothetical: we report 3 recent cases among public health and industrial laboratories in which misinterpretation of WGS results directly hindered public health and food safety investigations or responses.

Figure 1. Maximum-likelihood phylogeny constructed using core genes detected among 605 genomes assigned to the GTDB B. anthracis, B. paranthracis, and B. tropicusspecies. Branch colors and... 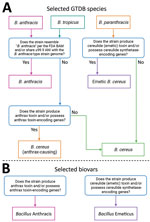 Figure 2. Flowcharts of Bacillus species and biovar name assignments. A) Flowchart depicting how 3 Bacillusspecies names assigned using GTDB releases R95 and R202 can be translated to...

Case 1 occurred in November 2018 at an industrial microbiology laboratory in Europe (Table 1). The inquiring party isolated B. cereus group strains from a food processing facility, then characterized them by WGS (protocols unknown). Each B. cereus group strain was assigned to a species by comparing its genome to the genomes of all B. cereus group species type strains and identifying the most similar species type strain by average nucleotide identity (7). Two strains were classified as B. anthracis using this approach (Table 1), and the inquiring party was concerned that the strains represented a potential anthrax threat (because of their B. anthracis label). However, subsequent investigation by M.W. and L.M.C. revealed that, although the strains most closely resembled B. anthracis, neither strain belonged to the historical, clonal B. anthracis lineage typically associated with anthrax toxin production (6), and neither strain possessed anthrax toxin- or capsule-encoding genes (Table 1; Figure 1). Thus, the strains were deemed incapable of causing anthrax, despite being assigned to B. anthracis by WGS. The authors noted that historically, these strains would be known colloquially as group III B. cereus, using microbiologic methods and panC phylogenetic group assignment (Figure 2, panel A).

Case 2 occurred in October 2021 at a regional public health microbiology laboratory in the United States (Table 1). The inquiring party was responding to a foodborne outbreak that occurred at a correctional facility in Maryland in mid-September 2021. During the outbreak investigation, a B. cereus group strain was isolated from rehydrated dehydrated potatoes using standard protocols (5). The strain underwent WGS and was classified as B. paranthracis (protocols unknown) (Table 1). The inquiring party had never heard of B. paranthracis before and conducted a literature search, noting that the species was first described in 2017 (10); because of limited documented history of B. paranthracis, the inquiring party contacted M.W., J.K., and L.M.C. for assistance. We informed the inquiring party that B. paranthracis has historically been identified as group III B. cereus on the basis of microbiologic methods and panC phylogenetic group assignment. We also noted that B. paranthracis encompasses all strains known colloquially as emetic B. cereus (for their ability to produce cereulide, an emetic toxin) and some group III B. cereus strains capable of causing diarrheal foodborne illness (Figure 2, panel A) (11). We suggested that the inquiring party use multilocus sequence typing and virulence factor detection to determine if the strain belonged to a lineage previously associated with foodborne illness.

Case 3 occurred in January 2022 at a national veterinary public health microbiology laboratory in South Africa (Table 1). I.M. and collaborators isolated B. cereus group strains during routine surveillance of meat products (12). WGS was conducted on some strains (13). I.M. and L.M.C. assigned B. cereus group strains to species using multiple WGS-based methods (13); one method relied on the Genome Taxonomy Database (GTDB), a popular contemporary microbial species classification framework (14). GTDB releases R95 and R202 classified 2 strains as B. anthracis (Table 1); however, neither strain belonged to the historical, clonal B. anthracis lineage (6), and neither possessed anthrax toxin- or capsule-encoding genes (Table 1; Figure 1). Nevertheless, an inquiring party was concerned that the strains represented an anthrax threat because of the GTDB B. anthracis label (Table 1). We informed the inquiring party that neither possessed anthrax toxin-encoding genes. We noted that historically these strains would be known as group III B. cereus, using microbiologic methods and panC phylogenetic group assignment (Figure 2, panel A).

The growing popularity of WGS offers tremendous potential for improving B. cereus group surveillance, source tracking, and outbreak investigations. However, taxonomic issues in the B. cereus group have become more pronounced as researchers grapple with historical and WGS-based species definitions.

Here, we detailed 3 cases in which misinterpretation of B. cereus group WGS results directly hindered public health and food safety efforts. Two cases (cases 1 and 3) represented false-positive scenarios, in which group III B. cereus strains incapable of causing anthrax were incorrectly assumed to be anthrax-causing agents (Table 1). As noted previously, strains that lack anthrax toxin-encoding genes but are assigned to B. anthracis using WGS-based methods are not uncommon (Table 2); these strains have been isolated from diverse environments (e.g., meat, milk, spices, egg whites, baby wipes) on 6 continents and the International Space Station, and although some may cause illness, they cannot cause anthrax (6). One way of denoting that a B. cereus group strain may produce anthrax toxin is to append the term “biovar Anthracis” to the genus/species name (Figure 2, panel B) (2).

The remaining case (case 2) represented a worst-case, false-negative scenario, in which a WGS-assigned species label with limited clinical interpretability or previous associations to foodborne illness (B. paranthracis) was assigned to an established pathogen (group III B. cereus) and directly hindered an outbreak investigation (Table 1). We anticipate that similar problems may arise with anthrax-causing B. cereus, because WGS-based methods assign some of these strains to B. tropicus, a species proposed in 2017 (Table 2) (7).We encourage readers to be mindful of this potential issue (Table 2). Overall, we hope that the cases we described can serve as cautionary tales for those who are transitioning to WGS for B. cereus group strain characterization.

Dr. Carroll is a computational biologist at the European Molecular Biology Laboratory in Heidelberg, Germany. Her research focuses on developing and utilizing bioinformatic approaches to study the evolution and transmission dynamics of foodborne and zoonotic pathogens. She has specific expertise in the genomics and taxonomy of the Bacillus cereus group.

Page created: July 31, 2022
Page updated: August 19, 2022
Page reviewed: August 19, 2022
The conclusions, findings, and opinions expressed by authors contributing to this journal do not necessarily reflect the official position of the U.S. Department of Health and Human Services, the Public Health Service, the Centers for Disease Control and Prevention, or the authors' affiliated institutions. Use of trade names is for identification only and does not imply endorsement by any of the groups named above.