A novel protein translocation system, the type-6 secretion system (T6SS), may play a role in virulence of Campylobacter jejuni. We investigated 181 C. jejuni isolates from humans, chickens, and environmental sources in Vietnam, Thailand, Pakistan, and the United Kingdom for T6SS. The marker was most prevalent in human and chicken isolates from Vietnam.

Campylobacter species are the principal bacterial cause of human foodborne enterocolitis worldwide (1). Despite the global significance of C. jejuni as a leading cause of diarrheal disease (2), the mechanisms of pathogenesis of C. jejuni are not well understood. Research on Campylobacter epidemiology has largely been conducted in high-income countries and therefore may not be representative of global patterns.

Recently, a novel class of protein translocation system was identified in gram-negative bacteria. This system, named the type-6 secretion system (T6SS), has been found to play roles in pathogen–pathogen and host–pathogen interactions and has a major effect on virulence in a range of pathogens, including Vibrio cholerae (3–6) (reviewed in 7,8). A functional T6SS was recently identified in C. jejuni (9,10) and found to have several roles in virulence, influencing cell adhesion, cytotoxicity toward erythrocytes, and colonization of mice (9,10). However, it is unknown whether T6SS changes the effects of these pathogens in human infection. 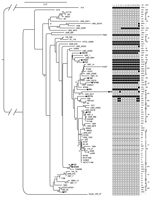 Figure 1. Distribution of the type-six secretion system (T6SS) marker across the phylogenetic diversity of Campylobacter jejuni strains, as determined by multilocus sequence analysisWe generated a maximum-likelihood tree from concatenated nucleotide alignments of...

To partially address bias toward study of C. jejuni strains from high-income countries and the under-representation of strains from Asia in previous studies, we previously sequenced the genomes of 12 clinical isolates of C. jejuni from Asia: 4 from Thailand, 3 from Pakistan, and 5 from Vietnam (J. Harrison, unpub. data; Figure 1). We noted that 8 (67%) of these isolates possessed a cluster of genes homologous to the recently described T6SS (Figure 1). This finding was in contrast to findings regarding previously sequenced C. jejuni genomes; only 10 (14%) of 71 previously sequenced C. jejuni strains possessed an apparently intact T6SS gene cluster (Figure 1; full listing of genomes is in Technical Appendix Table 1). Several other strains from our study and previously sequenced strains contained >1 T6SS genes but not a complete T6SS cluster. Figure 1 shows the presence and absence of each T6SS gene in each available genome sequence (J. Harrison, unpub. data) and the previously sequenced strains. A nonrandom distribution of T6SS can be seen across the phylogenetic diversity of C. jejuni; T6SS is limited to certain clades, and degeneration of the T6SS gene cluster apparently occurs in parallel within several of those clades (Figure 1).

Our genome sequencing analysis indicated that strains possessing a complete T6SS cluster could be distinguished by the presence of the hcp gene (Figure 1) (9,10). Therefore, we used hcp as a proxy for determining the presence of a functional T6SS in 181 C. jejuni isolates from chickens, humans, and environmental sources (collections of the Oxford University Clinical Research Unit and the University of Exeter; online Technical Appendix Table 2). We designed and used a multiplex PCR (Technical Appendix Table 3) to screen for the presence of hcp in these isolates; the conserved C. jejuni housekeeping gene, gltA, was used as a positive control.

Figure 2. Percentage of hcp-positive Campylobacter jejuni strains isolated from patients in Vietnam who had bloody diarrhea and nonbloody diarrheaPatients who were hospitalized because of Cjejuni infection were scored for the presence of...

We found a number of C. jejuni strains from humans and poultry that possessed the T6SS cluster, although some strains showed a slightly modified gene order (Technical Appendix Table 1 and Figure 3). However, most (61 [85.9%] of 71) of the previously sequenced C. jejuni isolates lacked a complete T6SS gene cluster (Figure 1); this finding might explain why T6SS was not discovered in C. jeuni sooner. Conversely, our PCR-based study frequently identified the hcp marker in isolates from Thailand, Pakistan, and Vietnam (Table). We cannot be certain that all of the isolates with the hcp marker possessed a complete and functional T6SS gene cluster, but the hcp gene is consistently associated with the presence of a complete T6SS cluster in all available sequenced C. jejuni genomes (Figure 1). This correlation lends confidence to the use of hcp as a proxy.

Poultry are a well-documented reservoir of human Campylobacter infection (12). We found that Campylobacter strains harboring the hcp marker were significantly associated with chickens in Asia. Large numbers of poultry are imported into North America and Europe from low-income countries, including Thailand (13). This process could introduce T6SS-positive Campylobacter genotypes into the food chains of the importing countries, posing a potential emerging threat to public health.

Our results suggest that the T6SS may be more prevalent in C. jejuni in Vietnam, Pakistan, and Thailand than in the United Kingdom. Furthermore, our results suggest that hcp may be a marker associated with severe human disease caused by C. jejuni infection in Vietnam, although there is no evidence that the association is causal. Chickens imported from these countries could be a source of hcp-positive strains and may have the potential to cause severe human infection.

Mr Harrison is a PhD student at the University of Exeter under the supervision of D.S. His research focuses on using bioinformatic methods to investigate the comparative genomics of emerging diseases and plant-associated microbes.

We thank Konrad Paszkiewicz and Karen Moore for assistance with whole-genome sequencing.

The work was partly supported by the UK Biotechnology and Biological Sciences Research Council, award BB/1024631/1 to R.T., D.S., and O.C.; by a Wellcome Trust Institutional Strategic Support Award (WT097835MF); and by a studentship awarded to J.H.