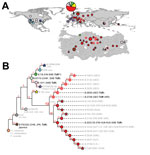 The phylogeography of F. tularensis in Asia is poorly understood because of undersampling in many regions, but recent studies have revealed new insights. A report has described rich phylogenetic diversity of the bacterium in China (4), including the rare B.16 group (biovar japonica). Previously, B.16 was known only in Japan (1) and Turkey (6). Sweden reportedly has the highest overall phylogenetic diversity among regions worldwide (2).

In Turkey, tularemia cases in humans have increased since 2009 (7), but little is known about environmental sources. Tularemia was first reported in Turkey in 1936 and then was sporadically reported for several decades (7). After improved surveillance, the number of tularemia cases increased in the 1980s and led to registration of tularemia as a reportable disease in 2004 (7,8). Incidence has continued to increase since then (7), and tularemia is now considered a reemerging zoonotic disease in Turkey.

Patients with oropharyngeal signs and symptoms account for ≈90% of tularemia cases in Turkey (8), and cases emerge seasonally from August–March (7). Seasonality of incidence of cases is presumably associated with consumption of contaminated water (9), but confirming sources is difficult. Reports of confirmation of F. tularensis from water samples by PCR (10) or culture (6) are rare, and definitive studies that link water to tularemia in humans are lacking. How water sources become seasonally contaminated is also unknown, but contamination could be caused by rodents. Recently, F. tularensis was confirmed by PCR from 2 mice captured in Thrace (11), but in Turkey, confirmation has not been obtained from ticks or mosquitoes, which are known vectors of F. tularensis (1,4).

Genetic characterization of clinical samples from tularemia outbreaks in Turkey in 2011 showed that multiple phylogenetic groups cause disease in multiple regions across Turkey (5); however, no environmental samples were assessed in that study. We report our findings from genetically characterized samples positive for F. tularensis from environmental and human sources located in multiple active tularemia areas in Turkey. Our results provide new insights into F. tularensis transmission from environmental sources to humans.

To examine environmental reservoirs that could be possible sources for human infections, during 2010–2013, we sampled water sources and rodent populations from suspected sites where transmission of F. tularensis infection could occur in Turkey. To survey and compare phylogenetic diversity of environmental samples and clinical samples, we examined 33 clinical samples of mostly oropharyngeal tularemia cases from approximately the same sites where environmental samples were collected. DNA was extracted (DNeasy Blood & Tissue Kit, QIAGEN GmbH, Hilden, Germany) from 6 water, 1 rodent spleen, and 33 human samples (Technical Appendix Table 1).

To determine detailed associations between environmental and human clinical samples, we examined the genetic diversity among these samples by using multilocus variable number of tandem repeats analysis (MLVA) (13). All samples contained a single MLVA genotype (Technical Appendix Figure, panels A–C); no mixed allele calls were observed at any of the examined variable number of tandem-repeats loci. Three different environmental samples (F0922, F0910, and F0916) had canSNP and MLVA genotypes that were identical to those of clinical samples (Technical Appendix Table 1). In 2 instances (F0910 and F0916), the environmental sample and its respective genetically identical clinical sample(s) were recovered from different geographic regions, resulting in identical genotypes being found in different localities and suggesting that close genotypes are dispersed widely in Turkey. One environmental sample (F0922) had genetic, geographic, and temporal data (Technical Appendix Figure, panel A) concordant with data from human samples. This water sample shared identical canSNP and MLVA genotypes with 5 clinical samples recovered 2 weeks previously at the same locality, strongly suggesting that the human cases are linked with this infected water source.

The genetic characterization of F. tularensis from environmental sources provides insights into transmission of tularemia from the environment to humans, but little is known about how water is contaminated. The seasonal nature of human outbreaks suggests that water sources are not constant reservoirs but rather are contaminated by another source. Rodents were identified as reservoirs (21% tularemia positive) in Bulgaria, where mainly oropharyngeal tularemia is endemic (14). We found a rodent sample (F0910) with canSNP and MLVA genotypes identical to an oropharyngeal clinical sample (F0898) (Technical Appendix Table 1), a finding consistent with water contamination that originates from animal sources. However, the converse is also possible: animals could become infected by contaminated water.

Analysis of the 7 environmental F. tularensis subsp. holarctica samples from Turkey revealed extensive phylogenetic diversity that represents most known major groups in the world. Three of the 4 major F. tularensis subsp. holarctica phylogenetic groups (B.4, B.6, B.12, and B.16) are found in Turkey, including the highly basal B.16 group (biovar japonica) (Figure 1). This finding indicates that no single phylogenetic type is dominant in Turkey, unlike in Western Europe (3). Diversity was also represented in the clinical samples, suggesting that all major groups have similar capacities to cause disease, as other studies have suggested (15).

Phylogenetically diverse strains of F. tularensis subsp. holarctica are environmentally established in Turkey and cause human disease. The strains in Turkey now include many phylogenetic groups previously found only in Scandinavia or Asia.

Dr. Kilic is a professor and a principal investigator of F. tularensis at the Public Health Institution of Turkey, National Tularemia Reference Laboratory, Ankara, Turkey. His research interests include the evolution, epidemiology, and control of bacterial zoonoses.

We thank Charles Williamson, Katy Califf, Bridget Barker, and Heidie Hornstra-O’Neill for assistance with the manuscript.

This study was funded by the US Department of Homeland Security, Science and Technology Directorate, Award NBCH2070001, and by the Cowden Endowment in Microbiology at Northern Arizona University.