Vesiviruses have been detected in several animal species and as accidental contaminants of cells. We detected vesiviruses in asymptomatic kennel dogs (64.8%) and symptomatic (1.1%) and asymptomatic (3.5%) household dogs in Italy. The full-length genome of 1 strain, Bari/212/07/ITA, shared 89%–90% nt identity with vesiviruses previously detected in contaminated cells.

Members of the family Caliciviridae are small (30–35 nm in diameter), nonenveloped viruses with a single-stranded, positive-polarity RNA genome of 7.4–8.3 kb. The family consists of the genera Vesivirus, Lagovirus, Norovirus, Sapovirus, and Nebovirus as well as unassigned caliciviruses (1,2).

Vesiviruses were originally identified in 1932 in California, USA, in domestic swine with vesicular disease. Since then, vesiviruses have been described in several animal species and humans, and they have been associated with a variety of clinical signs and lesions, including abortion, hepatitis, respiratory disease, diarrhea, myocarditis, encephalitis, mucosal ulcerations, vesicular lesions, and hemorrhagic syndromes (3–5). Unlike other caliciviruses, vesiviruses appear to readily cross host species barriers, and the marine ecosystem is believed to constitute a large reservoir of vesiviruses for terrestrial animals (5).

Vesiviruses have occasionally been detected in dogs with diarrhea and, in some instances, in dogs with glossitis, balanitis, or vesicular vaginitis (6–9). However, with the exception of a canine calicivirus, strain 48 (9), the caliciviruses detected in dogs have been feline viruses (6,7). The prototype canine calicivirus (CaCV) strain 48 was identified in Japan in 1990; the virus was isolated from a 2-month-old pup with intermittent watery diarrhea (9). Strain 48, which is antigenically and genetically unrelated to feline caliciviruses, was tentatively proposed as a true CaCV in the Vesivirus genus (10). Antibodies to strain 48 have been detected in 57.0% of dogs in Japan (11) and 36.5% of dogs in South Korea (12), but no information is available regarding the circulation of analogous viruses in dogs elsewhere.

In 2003, a novel vesivirus (strain 2117) genetically similar to CaCV strain 48 was accidentally isolated as a contaminant in Chinese hamster ovary (CHO) cell cultures by a pharmaceutical company in Germany (13). These cells are mostly used by biotech companies for the production of recombinant drugs; possible sources of contamination included reagents used for cell cultivation, such as porcine-derived trypsin or fetal bovine serum.

The limited information available does not clarify whether vesiviruses play a role as enteric pathogens in dogs. Considering the ability of vesiviruses to cross the host species barriers (5) and the close social interactions between humans and dogs, it is essential to determine whether dogs harbor viruses with a zoonotic potential. To further investigate the molecular epidemiology of vesiviruses, we screened fecal specimens from asymptomatic dogs and from dogs with diarrhea in Italy. 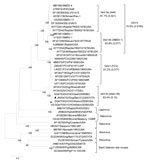 Figure 2. Phylogenetic tree based on the complete amino acid sequence of the capsid protein of vesiviruses (VeVs). The tree was constructed by using a selection of feline calicivirus strains and all of...

In previous investigations in dogs, strain 48–like vesiviruses were detected in only 2 (1.7%) of 119 samples: a fecal specimen from a dog with signs of enteric disease and a tonsillar swab specimen from a dog with respiratory disease (11). However, serologic investigations suggested that vesiviruses actively circulate in the canine population (11,12). In our virologic investigations, vesivirus RNA was detected in 64.8% (57/88) of dogs housed in 4 shelters but in only 1.1% (2/183) and 3.5% (4/114) of symptomatic and asymptomatic household dogs, respectively. These findings demonstrate that canine vesiviruses can be widespread in some settings or populations (e.g., kennels or shelters) where high population densities create favorable epidemiologic situations for circulation of some microorganisms.

Of interest, partial sequence analysis of the RNA-dependent RNA polymerase fragment of several of the dog-derived strains and full-length genomic sequencing of strain Bari/212/07/ITA showed that these canine vesiviruses were more similar to some vesiviruses found as contaminants of CHO cell cultures than to the prototype CaCV strain 48. Contamination of CHO cells by vesiviruses was documented in 2003 in Germany (13), 2008 and 2009 in the United States, and 2009 in Belgium. The 2008–2009 contamination in the United States was estimated to cost US $100–300 million in lost revenues to the biotech company because production was interrupted to provide adequate sanitation and maintenance of the bioreactors (15). In addition, these contaminations have raised concerns for the potential exposure of humans to these novel viruses because vesiviruses can readily cross the host species barrier (5).

Our findings show that genetically heterogeneous vesiviruses are common in dogs in Italy. Further studies are necessary to understand the ecology of this group of vesiviruses; that is, it must be determined whether vesiviruses circulate in humans or other animal species and, above all, whether they are associated with disease in humans, animals, or both.

Dr. Martella is an associate professor in the Department of Veterinary Medicine, University Aldo Moro. His research involves diagnosis, epidemiology, and characterization of enteric viruses, including rotaviruses, astroviruses, and caliciviruses, in animals and humans.