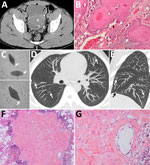 Figure. Schistosomiasis-induced squamous cell carcinoma of the bladder with pseudometastatic pulmonary nodules in a 30-year-old man from Mali. A) An unenhanced computed tomography axial image shows diffuse calcification of the bladder wall...

The patient was HIV-negative. We excluded tuberculosis on the basis of direct examination and culture of sputum and bronchoalveolar lavage fluid. The latter showed 160,000 cells/mL with hypereosinophilia (11%) and alveolar hemorrhage. Ziehl and Grocott stainings were negative. Bacteriologic tests were negative. We detected no tumor cell. We resected a nodule during video-assisted thoracoscopy. Anatomopathology revealed Bilharzia eggs with no carcinomatous lesions (Figure, panels F, G). Another nodule showed similar lesions. The eggshells appeared to be Ziehl-Neelson–negative, typical of S. haematobium. Echocardiography ruled out pulmonary hypertension.

The patient received 2 courses of praziquantel (40 mg/kg) at 8-week intervals. The tumor was considered free of node involvement and metastases. The patient underwent radical cystectomy with an orthotopic neobladder. Anatomopathology confirmed complete resection of the tumor reaching the muscle layer and the perivesical fat. At 3 months, blood eosinophils were normalized, and chest CT showed complete resolution of all pulmonary nodules. At 6-month follow-up, the patient was still in complete remission.

Schistosomiasis, the second most prevalent endemic parasitic disease, affects ≈230 million persons (2). This helminthic infection is caused by a trematode and is also known as snail fever or Bilharzia. The larvae burrow into human skin after contact with contaminated water and migrate within the vascular system to the lung. Through the portal system, mature forms reach venous plexuses surrounding the bladder, and released eggs enter perivesical venules. Adult lifespan averages 3–5 years and can persist up to 40 years.

Acute schistosomiasis occurs 3–6 weeks after infection. Eosinophilia serves as a diagnostic clue. Acute lung lesions are common (3). S. haematobium, found in Africa and the Middle East, induces urinary schistosomiasis with frequent hematuria. The infection causes fibrosis of the bladder, wall calcification, and hydronephrosis. A major complication is the development of SCC. Schistosomiasis-induced SCC is overrepresented in endemic regions, accounting for only 2.5% of bladder cancer in Western countries (4,5); it appears as a unique and voluminous mass with low incidence of lymph node involvement and distant metastases at 8%–10% (4,5). However, the prognosis remains poor, with 90% locoregional recurrence within 3 years. The effective treatment requires radical cystectomy.

Manifestations of chronic disease also involve the lung, and schistosomiasis is the leading cause of pulmonary hypertension, which occurs in 8%–25% of cases (6,7). A less reported aspect of chronic lung involvement is nodular lesions, which are described in 5% of schistosomiasis cases and are often asymptomatic when isolated (8). Belleli was the first to describe S. haematobium eggs in the lungs in 1885, stipulating that eggs laying into perivesical plexuses migrate from portal and caval veins to the lungs. Embolized eggs can produce a granulomatous reaction leading to pulmonary fibrosis and obliterative arteriolitis, causing pulmonary hypertension. However, the exact pathophysiology remains unclear and involves different mechanisms. Pulmonary symptoms are more often described with S. mansoni and S. japonicum than S. haematobium, which preferentially transits through the genitourinary rather than the hepatic portal system (9). Radiographic features resemble coins or cavitations, whereas CT shows a ground glass-opacity halo or reticulonodular pattern (8). Nodules, considered to be ectopic sites, remain unspecific and indistinguishable from secondary lesions (6). The diagnosis of chronic lung involvement is oriented by symptoms of associated end-organ. Treatment with praziquantel is efficient on ectopic lesions.

This case is interesting because of the double presentation of schistosomiasis-induced SCC and chronic lung involvement. Although metastases are less frequent than chronic pulmonary nodules, lung metastases were highly expected in the context of invasive SCC. Each diagnosis involves a different therapeutic approach, and delayed diagnosis can affect the patient’s prognosis. Lung biopsies might be necessary when severe disorders are suspected and avoided when suspicion for other causes, such as tuberculosis and malignancy, is low (8). In the latter scenario, PCR on bronchoalveolar lavage fluid might be an alternative in the diagnosis of chronic pulmonary schistosomiasis (10).

Dr. Saade started her work in medicine after she obtained her PhD in molecular biology and is currently a resident in infectious disease and hematology. Her primary research interests include the study of infections in immunosuppressed patients.

The authors thank Etienne Canoui and Alviset Sophie for their expertise on the topic, Yohann Rouscoff and Elie Saad for the surgical management of the patient, Emelyne Hamelin-Canny and Elena Garelli for performing lung biopsies, and Marie-Françoise Triller for her anatomopathology skills.

The patient approved the use of his medical record for this work and provided written informed consent.