Tuberculosis (TB) caused by concurrent infection with multiple strains of Mycobacterium tuberculosis during 1 episode is commonly referred to as mixed infection. In 1972, Canetti et al. suggested the concept of mixed infection of exogenous reinfection of nonprimary TB among elderly patients in France (1). Their observation was followed by phage typing of cultured isolates from patients with concurrent disease in multiple organ sites observed during clinical practice in North America, mixed cultures among Eskimo patients during the mid-1970s (2,3), and cultures collected during outbreak investigations in the 1980s and 1990s (4,5). However, more recent applications of advanced molecular tools suggest mixed infection might occur more frequently than initially expected (6,7). This possibility led to many research studies of mixed infection, which found that mixed infection is associated with poor treatment outcomes (6,8), including acquisition of multidrug-resistant TB (7,8). Mixed infection research contributed to the discovery that exogenous reinfection was responsible for a substantial portion of incident TB, implying incomplete protection from a primary infection in subsequent infections (9,10).

This analysis was part of a population-based, molecular epidemiology study in Botswana (the Kopanyo Study). The study design and methods were previously described (13). In brief, the study recruited and enrolled patients with newly diagnosed TB at 30 TB and HIV clinics during 2012–2016. Behavioral, clinical, and demographic information (including residential address at enrolment) were collected during medical record abstraction and standardized patient interview. Sputum collected from participants underwent smear-microscopy, culture, drug-susceptibility testing, and 24-locus mycobacterial interspersed repetitive unit–variable-number tandem-repeat (MIRU-VNTR) genotyping using a standard international protocol (14), when applicable.

Figure 1. Mixed-strain infection MIRU-VNTR permutations and genotype cluster/noncluster examples of Mycobacterium tuberculosis (the Kopanyo Study), Botswana, 2012–2016. On the basis of mixed-strain MIRU-VNTR patterns, all possible permutations at each of multiple allele...

We calculated simple frequencies and proportions for the main outcomes (mixed infection, possible mixed infection, and single infection) stratified by patient sex, HIV status, and residential address. Primary residential address of each patient was geocoded and mapped using ArcGIS (ESRI, https://www.esri.com). We showed the distribution of M. tuberculosis genotype clusters if found within 1 km of one another to add epidemiologic plausibility. We excluded patients with missing residential geocoding from the spatial analysis.

To assess potential variation within genotype relatedness, we explored an alternative clustering definition to include 1 locus difference. For this sensitivity analysis, potential near matches (i.e., matched on all other loci results but with a nonmatched tandem number at the locus of interest) were considered genotype clusters. We excluded patients with isolates with missing or incomplete MIRU-VNTR results from the sensitivity analysis.

A total of 2,137 patients were enrolled, of whom 1,130 (53%) were HIV positive (Table 1). After excluding patients with missing or incomplete MIRU-VNTR results (including 3 patients with mixed infection), we included 2,051 patients in the analyses (Figure 2). A total of 862 discrete genotyping MIRU-VNTR results were obtained (a more detailed strain analysis is available elsewhere [15]). We detected no evidence of laboratory cross-contamination events within sputum processing, culturing, DNA abstraction, or genotyping processing. All mixed infection patient isolates were processed on different days from isolates from other purported patients in the cluster.

Figure 3. Potential spatial relationships (residence within 1 km of another patient) between patients with mixed-strain infection and with other genotype-clustered strains, Gaborone, Botswana, 2012–2016. Shown are location of patients with mixed Mycobacterium... 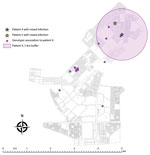 Figure 4. Potential spatial relationships (residence within 1 km of another patient) between mixed infection and other genotype-clustered cases, Ghanzi, Botswana, 2012–2016. Shown are locations of patients with mixed Mycobacterium tuberculosis infection and...

We describe genotype patterns consistent with hypothesized mixed infection transmission mechanisms, using a multiyear, population-based TB cohort. In our study, most patients with mixed infection (68%) had both recently and remotely acquired strains, suggesting recent transmission and simultaneous remote reactivation. Recent infection that progresses to disease might further compromise the immune system, leading to reactivation. A previous case study described a patient with mixed infection with an apparent triggering of a remote multidrug-resistant M. tuberculosis strain after recent exposure to a drug-sensitive strain (16). A similar phenomenon has been described for relapse of Plasmodium vivax malaria triggered by infection with P. falciparum (17).

Similarly, our findings suggest that most mixed infection transmission events included reactivation of remotely acquired strains triggered by recently acquired strains, implying that mixed infection may be affected by the force of infection in communities (10,11). We estimated the prevalence of each discrete MIRU-VNTR result as a proxy measure of force of infection in our study population. Contrary to our expectation, the 2 most prevalent strains (MIRU IDs 644 and 382) appeared in only 1 mixed infection transmission event. The dominate strain in the mixed infection was MIRU ID 838, which appeared 3 times. Further studies can show whether less transmissible strains outcompete other strains within the host to establish long-term persistence (11).

Our results add to the complexity of TB transmission dynamics in high TB prevalence settings (7). Current TB prevention strategies primarily focus on interrupting recent TB transmission through early detection and treatment of sputum smear–positive patients (18). Although interventions to interrupt transmission can reduce opportunities of exogenous re-infection and hence reduce the prevalence of mixed infection (10), our findings also imply the importance of treating latent TB infection to reduce the risk for mixed infection (19). No statistical association between HIV status—a proxy for reduced latency—and mixed infection (data not shown [odds ratio 1.15 (95% CI 0.79–1.68)]) also further supports the influence of remotely acquired strains in polyclonal transmission events. Our study alone might not be sufficient to generalize the results and emphasize reactivation. However, we envision further exploration of our suggested 3 transmission mechanisms in a setting where the transmission intensity is expected to be higher (e.g., high population density or dense slum area) and the role of reactivation is accounted for accordingly.

We added the spatial information to provide epidemiologic evidence of possible M. tuberculosis transmission. If patients whose isolates are in the same genotype cluster are spatially close to each other (i.e., within 1 km), they might be more likely to be in a transmission network than otherwise. This interpretation may be limited as we accounted only for the patients’ residential address as the spatial information, the close proximity set as 1 km was arbitrary, and the few TB clusters (and number of patients therein) may be missed if mixed infection is not included in transmission network reconstructions. However, our finding reconfirmed that TB transmission was ongoing in the community. A comprehensive molecular characterization of within-host M. tuberculosis diversity, as well as an attempt to temporally identify the primary source or index of transmission by comparing diagnosis times and the times of symptom onset (20), might be needed to fully capture TB transmission chains and accurately infer TB transmission (21,22).

Our results should be interpreted with caution. The prevalence of mixed infection was lower than in other studies (9,23) because of the method of molecular analyses. Although 24-loci MIRU-VNTR is a standardized molecular characterization tool and offers simple results that can be readily used to identify mixed infection (7,24), it has limited resolution to distinguish mixed infection from clonal heterogeneity or within-host bacterial microevolution (9,25,26). Different tools, such as whole-genome sequencing and 2 lineage-specific PCRs, might identify M. tuberculosis strains more sensitively and lead to a different dominating transmission mechanism if more patients with mixed infection were detected (23,27). In the meantime, we defined and analyzed possible mixed infection and mixed infection separately in an attempt to more conservatively differentiate mixed infection from within-host heterogeneity. Another limitation involves misclassification bias from detection sensitivity (28); that is, all potential genotyping matches depend on the sensitivity of the characterization method. The 24-loci MIRU-VNTR method is relatively sensitive and has high discriminatory power; however, it characterizes only part of the M. tuberculosis genome (7). Hence, we might have missed genetic heterogeneity present in loci not covered by this method (12). The prevalence of each M. tuberculosis strain also depended on the degree to which we captured all M. tuberculosis strains present in the community. Although our study was multiyear and covered a broad geographic area, some important patients in the transmission network could have been missed (e.g., their TB was diagnosed before the study period, they resided in areas not covered by the study, or they refused enrolment), leading to clustering misclassification. We recruited TB patients through both passive and active case finding (13) to increase coverage, but not every patient produced sputum, and not all sputum samples led to M. tuberculosis isolation or valid genotype results (15). This limitation might lead to missed transmission links (18,21). Given generally low bacillary load among children, the transmission mechanism would have been affected in a way that the role of reactivated strains was reduced if missing sputum samples had been successfully identified. On the other hand, by enabling multiple permutations of possible MIRU-VNTR results for mixed infection and possible mixed infection cases, MIRU-VNTR results with multiple alleles had more possible combinations and higher chance of matching with other genotypes. This finding may imply an imbalanced chance of being a member of a genotype cluster.

We are grateful to the patients with TB and their families for participating in this study. We thank the district health team and recruitment and retention officers who helped us coordinate with and contact patients. We are indebted to the Botswana National Tuberculosis Program and Botswana Ministry of Health for their partnership in this effort. We also thank the following persons for their thoughtful reviews of this manuscript: Benjamin Silk, Thomas Navin, James Posey, Carla Winston, Susan Cookson, Katina Pappas-DeLuca, and William Levine.

This study was funded by US National Institutes of Health (grant nos. R01AI097045, K01AI118559) and by the President’s Emergency Plan for AIDS Relief (PEPFAR) through the US Centers for Disease Control and Prevention.