Artemisinin-based combination therapies (ACTs) have contributed greatly to the global decline of illness and death from malaria (1). However, the novel emergence of artemisinin resistance in eastern Africa has threatened the effectiveness of these breakthrough treatments (2–4). To avert potential disaster resulting from increased resistant malaria cases, the nature and extent of this resistance in Africa urgently needs to be characterized.

We recruited malaria patients in Huye District, Rwanda, during September–December 2019 and documented patient characteristics and consent, ethical clearance, and K13 variants elsewhere (2). Within 6 hours of sample collection, we cryopreserved all 66 P. falciparum isolates in ethylenediaminetetraacetic acid by washing the red blood cell pellet, adding freezing solution (3% sorbitol, 28% glycerol, 0.65% NaCl), and freezing at −80°C. Eight of the 66 isolates carried nonsynonymous K13 mutations (2). We successfully thawed and culture-adapted 4 of the isolates in which we identified K13 mutations: R561H, the current prevalent mutation in Rwanda; A675V, found in 11% of P. falciparum samples in Uganda; C469F, another candidate marker; and V555A, which is of unknown significance.

We conducted a 0–3-h postinvasion ring-stage susceptibility assay (RSA) with the active metabolite dihydroartemisinin (6). We exposed ring stages to a 6-h pulse of 700 nmol/L dihydroartemisinin and cultured exposed and nonexposed isolates in vitro in triplicate for 72 h. We counted parasite density per ≥10,000 red blood cells on Giemsa-stained thin blood films and calculated the means of triplicates. Dividing parasite density in dihydroartemisinin-exposed cultures by the density in nonexposed cultures provided the RSA survival rate. We considered results if 72-h growth rates exceeded 1.5× rates in the nonexposed controls and had >3 successful independent triplicate experiments per isolate. We also assessed 50% inhibitory concentrations (IC50) (7). We exposed synchronized ring-stage parasites for 72 h across a range of dihydroartemisinin concentrations (0–1 µmol/L) in duplicate or triplicate and in ≥3 independent experiments. We measured growth by SYBR Green I staining (ThermoFisher, https://www.thermofisher.com) and performed photometric assessment using FilterMax F5 microplate readers (Molecular Devices, https://www.moleculardevices.com). We estimated IC50 using a 4-parameter fit dose-response curve. For artemisinin-susceptible parasites, 2 cultured wild-type isolates from patients in Rwanda grew too poorly for RSA and IC50 assays and were replaced by artemisinin-susceptible K13 wild-type strain NF54, which is of putative African origin. We assayed isolates in parallel with NF54 and compared IC50 by Student t-test. We performed analyses using R version 3.6.3, including the drc (dose-response curve) package (https://cran.r-project.org/web/packages/drc/drc.pdf). 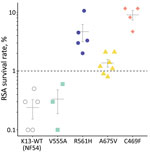 Figure 2. IC50 values for dihydroartemisinin for an artemisinin-susceptible, K13 WT Plasmodium falciparum strain (NF54) and in 4 P. falciparum patient isolates from Rwanda with ...

We determined the regional origin of the 4 tested patient isolates by single-nucleotide polymorphism (SNP) barcoding. We typed 23 SNPs to group into haplotypes associated with geographic origin (7,8). The R561H isolate displayed haplotype 9 and the other isolates haplotype 22 (9), confirming African ancestry.

Artemisinin resistance is defined by RSA results and delayed parasite clearance in treated patients. In Africa, abundant K13 variants circulate, but very few have been defined in terms of drug susceptibility (1). The K13 mutation R561H, which has emerged in Rwanda (2,5), confers delayed parasite clearance (3). We found that a patient isolate with the R561H mutation from Rwanda was in vitro artemisinin resistant. Taken together, these results strongly suggest that R561H is a marker of resistance in Rwanda, a finding that needs to be confirmed in larger sample-size research. The same need for confirmation applies to K13 candidate resistance markers A675V, recently characterized in Uganda (4), and C469F (1).

RSA survival rates for K13 R561H P. falciparum in our study concord with levels in multiple gene-edited P. falciparum lines (5,10). Also in line with our findings are high RSA survival rates in A675V isolates from neighboring Uganda, where K13 A675V was found in 11% and C469Y (but not C469F) in 2% of P. falciparum isolates collected during 2017–2019. Both mutations are associated with delayed parasite clearance (4). Isolates with increased survival rates also showed higher dihydroartemisinin IC50 levels. If this association is confirmed, IC50 assays that are much less labor-intensive could be useful for flagging isolates deserving additional testing by RSA.

The small number of isolates we evaluated was an obvious limitation of our study. Ideally, we would have compared the effects of individual mutations in wild-type isolates from Rwanda with study isolates, but the few selected performed poorly in vitro and were replaced by the artemisinin-sensitive NF54 strain, enabling us to verify that the RSA was working properly. A study strength is the detailed characterization of the susceptibility and ancestry of isolates.

Artemisinin resistance alone does not necessarily lead to ACT treatment failure, and efficacy in Rwanda still is high (3). However, resistance leaves the partner drug unprotected, potentially leading to resistance developing to that component as well. Eventually, this process could result in increased ACT treatment failure, which has already been observed in southeast Asia (11,12). In Africa, this development might be delayed because of prevalent partial immunity contributing to parasite elimination and high transmission increasing the likelihood of resistance allele outcrossing. Nonetheless, in Rwanda, where artemether/lumefantrine is the first-line antimalarial drug combination, a shift in the P. falciparum multidrug resistance 1 (pfmdr1) genotype pattern over the past decade suggests an increasingly lumefantrine-tolerant phenotype (13,14), although pfmdr1 is not a validated marker for lumefantrine resistance.

Recent research indicates that the R561H mutation is fitness neutral (10), implying its wider dissemination even without drug pressure. So far, a viable alternative to ACTs is not in sight. Increasing resistance, combined with the lack of effective alternative antimicrobial drugs, suggests a pessimistic scenario for sub-Saharan Africa, considering the region’s high malaria burden. Large-scale monitoring, containment strategies, and early consideration of 3-drug ACTs (15) are required to control widespread artemisinin resistance in Africa.

Ms. van Loon is a PhD candidate at the Institute of Tropical Medicine and International Health, Charité Universitaetsmedizin Berlin. She is interested in infectious disease epidemiology and public health. This manuscript forms part of her PhD thesis.

We are grateful to the staff of Sovu Health Centre and Kabutare District Hospital for their collaboration and help. We thank Megan Peedell and Katja Puestow for their support in the laboratory.

The German Research Foundation financially supported this study through grants to W.v.L. (GRK2046) and R.O. and C.B. (GRK2290). The funding bodies had no role in designing the study, collecting, analyzing, or interpreting data, or writing the manuscript.

Page created: January 27, 2022
Page updated: March 19, 2022
Page reviewed: March 19, 2022
The conclusions, findings, and opinions expressed by authors contributing to this journal do not necessarily reflect the official position of the U.S. Department of Health and Human Services, the Public Health Service, the Centers for Disease Control and Prevention, or the authors' affiliated institutions. Use of trade names is for identification only and does not imply endorsement by any of the groups named above.