The bacterium Streptococcus pneumoniae is a serious cause of illness and death and a major etiologic agent of community-acquired pneumonia, meningitis, and acute otitis media. Pneumococcal resistance to antimicrobial drugs (including β-lactams, macrolides, tetracycline, and cotrimoxazole) has become a worldwide problem (1); new fluoroquinolones are being used as therapeutic alternatives for treatment of adult patients with community-acquired pneumonia (2). Resistance to fluoroquinolones in S. pneumoniae can be acquired by point mutations, intraspecific recombination (3) or interspecific recombination with the S. mitis group (3–7). Resistance is caused mainly by amino acid changes in quinolone resistance–determining regions (QRDRs) of the subunits of DNA topoisomerase IV (topo IV; parC2 and parE2) and DNA gyrase (gyrA2 and gyrB2) enzymes that control DNA topology. In addition, fluoroquinolone efflux also contributes to resistance (8). Genetic and biochemical studies have shown that for most fluoroquinolones, such as ciprofloxacin and levofloxacin, topo IV and gyrase are primary and secondary targets, respectively (9–13). However, gyrase is the primary target for moxifloxacin (14).

Although current prevalence of fluoroquinolone resistance in pneumococci is <5% (15–17), surveillance is necessary. Introduction of the 7-valent conjugate pneumococcal vaccine (PCV7), which includes serotypes such as 6B, 9V, 14, and 23F that are often associated with resistance to fluoroquinolones and other antimicrobial drugs, has resulted in changes in the epidemiology of invasive pneumococcal disease (18–20). Since the introduction of PCV7 in Spain in late 2001, ≈47% of children have been vaccinated (21).

In this study, we investigated the prevalence of fluoroquinolone-resistant pneumococci in Spain during 2006. Mutations in the QRDRs of parC, parE, and gyrA were identified, and the presence of reserpine-sensitive fluoroquinolone efflux was determined. In addition, resistance associations with other antimicrobial drugs and characteristics of drug-resistant clones were determined. To better evaluate changes in the epidemiology of resistance after the introduction of PCV7 in children, we compared our results with those of a similar study that tested isolates from 2002.

We studied 4,215 S. pneumoniae isolates from 2 hospitals (in Barcelona and San Sebastián), and a sample from 110 hospitals throughout Spain (Spanish Reference Laboratory, Madrid). Of the isolates, 2,682 were from adults, 1,400 from children, and 133 from persons whose ages were unknown. A total of 2,101 (49.9%) isolates were obtained from blood or other sterile sites; 1,055 (25%) from the lower respiratory tract; 960 (22.8%) from the upper respiratory tract, otic and conjunctival sites; and 99 (2.3%) from other sites. Isolates were confirmed as S. pneumoniae by standard methods, and serotypes were determined by the Quellung reaction. Ciprofloxacin susceptibility was determined by broth microdilution tests (Sensititer; Trek Diagnostics Inc., East Grinstead, UK) and by agar dilution according to the Clinical and Laboratory Standards Institute guidelines (22). Reserpine-sensitive fluoroquinolone efflux phenotype was determined as described (23). We performed genetic transformation as described (24) by using S. pneumoniae strains R6 and T1 (25) as receptors. For selection of transformants, we used media plates containing 1 μg/mL (R6 derivatives) or 8 μg/mL (T1 derivatives) of ciprofloxacin.

Pulsed-field gel electrophoresis (PFGE) patterns were determined by using SmaI and ApaI as described (24) and compared with 26 representative clones of the Pneumococcal Molecular Epidemiology Network (26). Isolates with patterns varying by <3 bands were considered to represent the same PFGE type (27). Multilocus sequence typing was performed as described (28) with representative isolates of PFGE types shared by >3 isolates (www.mlst.net). We analyzed selected strains representative of dominant clones from the 2002 study by multilocus sequence typing.

The parC, parE, and gyrA QRDRs of the 98 CipR isolates were characterized. Most CipR isolates (93/98) showed low nucleotide sequence variations (<1%) in their QRDRs, but 5 isolates showed high variations (>4%). Four of them were in parC, parE, and gyrA, and only 1 was in gyrA. These results suggest an interspecific recombinant origin for these genes. In accordance, all isolates with recombinant parE and parC genes carried the ant gene, typical of the S. mitis group (4), as shown by PCR amplification.

Twenty-one of the 98 isolates had efflux for Cip; 3 of them also had efflux for levofloxacin (Tables 2, 3), and none had efflux for moxifloxacin. Efflux was equally distributed among LL-CipR and HL-CipR isolates. The contribution of the efflux mechanism to resistance in those isolates is unclear. Mutations not previously described that produced changes in parC (D78N, S80P, D83E), parE (I476F), and gyrA (G79A, S81V, E85G, V101I) were found in 8 isolates. To test the contribution of these changes to resistance, transformation experiments using strains R6 or T1 (as R6, parC S79F) as receptors of parC or gyrA QRDRs, respectively, were performed. The QRDRs of several independent transformants were sequenced to confirm the presence of the same mutation in the donor DNA and MICs of these transformants were determined. Although no transformation was achieved with PCR products carrying parC D78N or parE I476F, transformation to increased resistance was observed with products carrying parC S80P, gyrA S81V, and gyrA E85G changes (Table 2). 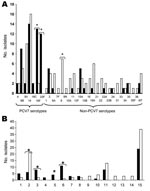 As we observed, isolates that shared the same PFGE pattern also shared identical polymorphisms on their DNA topoisomerase QRDRs. All but 1 of the isolates belonging to the Spain9V-ST156 clone had identical polymorphisms, the same found in the ATCC 700671 strain representative of this clone (15); the only exception was an isolate with parC, parE, and gyrA recombinant genes.

We observed a stabilization during 2002–2006 in the rates of fluoroquinolone resistance in Spain. Although the rate of Cip resistance in 2002 was 2.6% (2.2% for levofloxacin), it was 2.3% (1.7% for levofloxacin) in 2006. The rates of Cip resistance were also similar for the different age groups (3.5% for adults and 0.14% for children in 2006). However, a decrease in the rate of resistance in persons >64 years of age was found in 2006. Higher levels of resistance were found in S. pneumoniae isolated from sputa and in isolates from people >64 years of age, who more frequently have chronic obstructive pulmonary disease and who have been treated with multiple regimens of antimicrobial drugs. In accordance, development of fluoroquinolone resistance has been reported for these patients (31–33). The frequency of HL-CipR resistance in adults was 2.5% (68/2,769), slightly higher than that reported for persons in other countries in Europe (34).

A direct correlation between use of fluoroquinolone and prevalence of resistance in S. pneumoniae has been described (30,35). Cip use in Spain has remained stable since 1997 at 1.1 defined daily doses (DDDs)/1,000 inhabitants-days, whereas that of levofloxacin and moxifloxacin increased during 2002–2006 (from 0.2 to 0.4 DDDs/1,000 inhabitants-days for levofloxacin and from 0.3 to 0.4 DDDs/1,000 inhabitants-days for moxifloxacin, Agencia Española de Medicamentos, Madrid, Spain; http//agemed.es). Because the borderline activity of Cip against S. pneumoniae favors acquisition of first-step parC mutations (15,36), we expected that the greater activity of levofloxacin and moxifloxacin would not favor the appearance of resistance, even if one considered their increased use.

The frequency of CipR recombinants in 2006 remained low (5.1%, 5/98 CipR isolates), similar to that in 2002 (6.7%) and that reported previously (3,4). Four isolates with mosaic parE-parC genes and long intergenic regions (4–6 kb) containing the ant gene probably originated by recombination with the S. mitis group (4). One of them belongs to the Spain9V-ST156 clone and was not typeable. The predominance of this clone and the fact that the recombinant parE-ant-parC structure did not impose a fitness cost (25) suggest recombinants could become more prevalent in the future.

Dr de la Campa is a research scientist at the Instituto de Salud Carlos III in Madrid, Spain. Her research interest focuses primarily on the molecular basis of antimicrobial drug resistance in bacteria.

Ciber Enfermedades Respiratorias is an initiative of the Instituto de Salud Carlos III.