In May 2015, Middle East respiratory syndrome coronavirus infection was laboratory confirmed in South Korea. Patients were a man who had visited the Middle East, his wife, and a man who shared a hospital room with the index patient. Rapid laboratory confirmation will facilitate subsequent prevention and control for imported cases.

Middle East respiratory syndrome (MERS) is characterized by mild-to-severe respiratory distress and is caused by a novel coronavirus (MERS-CoV) (1). Since its first identification in 2012, MERS-CoV infection has been reported for 1,413 persons from 26 countries; case-fatality rate is 40.92% (2). We describe an outbreak comprising 3 laboratory-confirmed cases of MERS-CoV infection in South Korea (3–5).

In accordance with national MERS control guidelines in South Korea (6), specimens are collected from hospitalized patients suspected of having MERS on the basis of epidemiologic history linked to the Middle East; these specimens are then transferred to the Korea National Institute of Health for examination. The index patient, a 68-year-old man engaged in farming-related business, reported that he had traveled to Bahrain on April 24, 2015, the United Arab Emirates on April 29–30, Saudi Arabia on May 1–2, and Qatar on May 2–3 before returning to South Korea on May 4 (Figure 1). While in these countries, he was not exposed to any patients, health care facilities, or animals (including camels and bats) or their excreta. On May 11, the patient experienced chills and a fever (>37°C), and an allopathic medicine was prescribed when he first visited a local clinic. However, his symptoms worsened (temperature >38°C, myalgia, cough, and dyspnea), and after he had visited 4 hospitals (hospitals A–D, in or around Seoul), he was admitted to a general hospital (hospital D, Seoul, South Korea) on May 18. A nasopharyngeal aspiration specimen was collected for MERS-CoV laboratory testing on May 19.

Laboratory diagnostic methods were performed according to World Health Organization guidelines for molecular detection of MERS-CoV (7–9). To check for contamination derived from the positive control, we designed and synthesized the MERS-CoV real-time reverse transcription PCR (rRT-PCR)–positive transcripts for an upstream MERS-CoV envelope protein gene (upE) and the open reading frame 1a (ORF1a) gene containing 50 bp of a foreign gene (centipede).

Initially, nasopharyngeal samples from the index patient were positive for MERS-CoV by multiplex rRT-PCR. Sputum samples from patients 2 and 3 were also positive, supporting a diagnosis of MERS-CoV infection. Multiplex rRT-PCR results for upE and ORF1a were positive (Table 1). According to rRT-PCR, the respiratory samples from the 3 patients were negative for 5 other human coronaviruses (SARS-CoV and human CoV-229E, -OC43, -NL63, and -HKU1) and 7 viruses that cause acute respiratory infection (influenza virus A and B; human adenovirus; bocavirus; human parainfluenza virus types 1, 2, and 3; respiratory syncytial virus A and B; human rhinovirus; human metapneumovirus).

For the index patient, MERS-CoV RNA was detectable in sputum, throat swab, and serum samples but not in a urine sample collected 9 days after symptom onset (Table 1). The viral load, indicated by cycle threshold values, was high in the lower respiratory tract sample but almost undetectable in the throat swab and serum samples. After sequential sampling repeated every 2–5 days, MERS-CoV RNA was detected in sputum until 44 days after symptom onset, although viral RNA was inconsistently detected and patterns of viral load fluctuated (Table 2). Other than initial fever (>37°C), clinical features differed for all 3 patients. The index patient had respiratory symptoms with cough, dyspnea, and myalgia. Patient 2 did not have a relevant medical history and showed mild symptoms. Patient 3 had underlying concurrent conditions and died 16 days after confirmation of MERS-CoV infection (Figure 1). 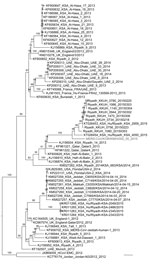 Virus isolation on Vero cells was attempted for each respiratory specimen from the 3 patients. The culture supernatant after inoculation was serially assessed for virus growth by using rRT-PCR and was used for blind passages every 3–7 days after inoculation. After 3 blind passages, cytopathic effect was observed, and we isolated the MERS-CoV strain from South Korea (KOR/KNIH/002_05_2015) from the Vero cells after inoculation by using the sputum from patient 2. We constructed a phylogenetic tree by using the general time reversible plus gamma model of the RAxML version 8.8.0 software (10) and FigTree version 1.4.2 (http://tree.bio.ed.ac.uk/software/figtree) and by using complete genomes of the MERS-CoV isolate from South Korea (GenBank accession no. KT029139) and 67 reference MERS-CoVs (Figure 2).

Because, to our knowledge, cases of MERS-CoV infection in South Korea have not been reported, we had to establish laboratory testing protocols to overcome vulnerabilities in the absence of appropriate epidemiologic support (i.e., generate positive controls to check for contamination and repeat testing). Positive controls containing foreign genes have been generated to check for laboratory contamination. For patients with an unclear exposure history (such as the index patient) and for patients with short exposure durations and unusual clinical symptoms (such as patients 2 and 3), it would be useful if the positive results of rRT-PCR could be confirmed through agarose gel electrophoresis to exclude contamination from the positive control (3,4).

The index patient had no history of potential exposure to camels, bats, or their excreta; to symptomatic persons; or to health care workers during his trip to the Middle East, including Saudi Arabia. Although the source of infection for the index patient is unclear, phylogenetic analysis of the whole viral genome showed that the isolate from South Korea was closely related to the MERS-CoV strains isolated in Saudi Arabia in 2015.

Because the index patient initially concealed his travel history to Saudi Arabia, United Arab Emirates and Qatar, MERS-CoV infection was not considered and the patient was not isolated until MERS-CoV infection was suspected 7 days after symptom onset. Meanwhile, other patients and health care workers had multiple opportunities for exposure to the index patient (3–5). The 2 contacts reported here had each been exposed to the index patient. Patient 3 was probably infected via droplet transmission in the hospital room. The hospital room, originally built for 6 persons, had been divided into 2 rooms and lacked ventilation. Furthermore, an air conditioning unit cycled the air in the room with the door and window closed. Thus, poor ventilation might have played a major role in droplet transmission. Detection of MERS-CoV RNA in the respiratory tract varies up to day 33 (11–13). In this study, virus was detected in the respiratory tract, inconsistently, for up to 44 days.

Development of effective preventive measures for the MERS-CoV prevention will require systemic and prospective studies associated with viral shedding and use of specimens in addition to those obtained from the respiratory tract to define the kinetics of MERS-CoV. Rapid detection of MERS-CoV, using multiplex rRT-PCR to detect upE and ORF1a genes, would be helpful for countries outside the Arabian Peninsula.

Dr. Yang is a staff scientist in Korea National Institute of Health, Korea Centers for Disease Control and Prevention. Her research encompasses the diagnosis, immune response, viral pathogenesis, epidemiology of respiratory viruses with a particular interest in emerging virus identification.

We thank the division of epidemic intelligence service and National Medical Center for assistance with identifying patients, abstracting medical records, and collecting specimens.